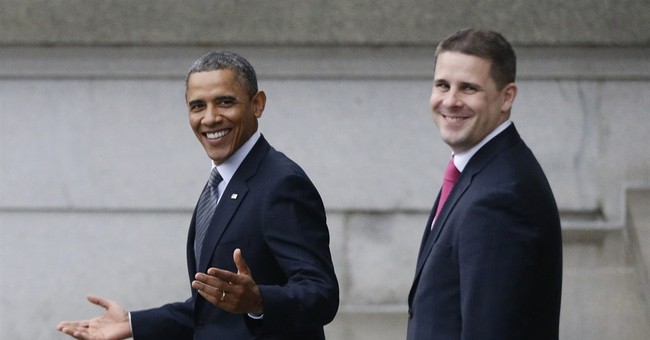 White House Senior Adviser Dan Pfeiffer appears to be the administration's "short straw" mouthpiece. With some regularity, he is handed the duty of defending the president on Sunday morning chat shows on the heels of particularly bruising news weeks. Perhaps his most memorable performance came last spring, when he bungled a series of interviews on Benghazi and the IRS targeting scandal -- repeatedly swatting down questions as "irrelevant." In one exchange, he actually uttered this sentence: "The law is irrelevant." Pfeiffer was up to bat on Meet the Press yesterday, where he turned in a typically poor outing. Pressed by David Gregory about the president's broken "keep your doctor" promise, Pfeiffer insisted that this betrayal isn't Obamacare's fault. Blame the insurers, he said:

This answer is rubbish. First of all, the question of who or what is specifically to blame for people losing their doctors is, as Pfeiffer might put it, irrelevant. President Obama made a sweeping, comprehensive promise to the American people in selling Obamacare. Watch the very first clip from the video we released on Friday:


"No matter how we reform healthcare, we will keep this promise to the American people: If you like your doctor, you can keep your doctor. Period."


No wiggle room, no ambiguity. Everyone who liked their doctor could keep them. Period, end of story. But that is not the case for millions of people now that the law is in effect. Second, these major and widespread disruptions to insurance networks and plans have been precipitated by the healthcare law. Everyone understands that. To pretend that Obamacare has nothing to do with the upheaval it mandates is laughable. Finally, the White House's own internal estimates predicted that more than 90 million Americans' prior plans would lose grandfathered status under Obamacare. They knew that tens of millions of people in the individual, small group and large employer markets would be unable to maintain the coverage they had. That fact renders Obama's "keep your plan" vow even more inexcusable. And an unavoidable byproduct of people being stripped of their plans is a ripple effect on coverage networks and doctors. People are losing the plans and physicians that they like and trust as a direct result of Obamacare, and in direct contradiction of what the president said over and over again. Pfeiffer's spin is insultingly stupid, and it won't work. Pfeiffer wasn't finished, unequivocally promising that Obama will not delay the individual mandate tax:


"That will not happen," he asserted. One problem: It already effectively has happened. The administration recently changed Obamacare's regulations to grant "hardship waivers" to essentially anyone who wants one, for any vague reason, with no proof required, until 2016. David Gregory was apparently ignorant of that development, as it would have made for one hell of a follow-up question. Finally, Pfeiffer stated with a straight face that President Obama will be an asset to Democrats in the 2014 elections: