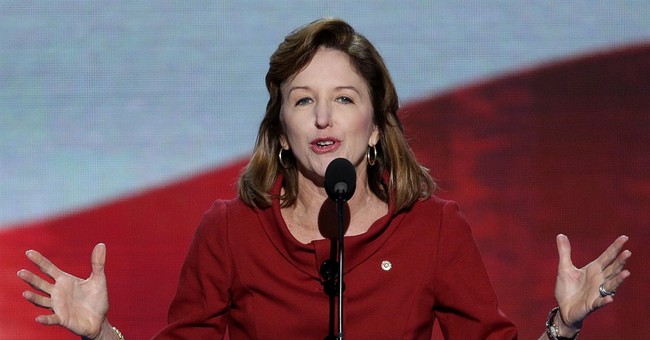 Sen. Kay Hagan (D-NC) is an extremely busy woman -- far too busy, in fact, to offer a coherent answer to a relevant question about her role in passing Obamacare. She voted for the law in 2009 and 2010, then joined all of her Democratic colleagues to defeat a Republican attempt to revise its grandfathering guidelines in such a away that would have preserved the president's since-obliterated "keep your plan" pledge. At a press event yesterday, reporters wanted to know why Sen. Hagan has feigned shock and outrage over millions of Americans losing their preferred plans. Why did she vote against a plan to preserve the promise? When did she "discover" that "keep your plan" was a fiction? Hagan wasn't interested in answering those questions:

Like President Barack Obama, Hagan said the Affordable Care Act would allow North Carolinians to keep their existing insurance plans if they liked them. The pledge proved false – and earned Obama PolitiFact’s Lie of the Year honors. But the details about what Hagan knew about the law’s limits and when she learned it remains unclear. Asked about it again Monday at a press conference in Raleigh, after she made her re-election bid official at the State Board of Elections, Hagan avoided the question. Pressed on the question two more times as reporters followed her outside to the parking lot, Hagan did not answer. She offered this explanation without further details: “it wasn’t clear that insurance companies were selling substandard policies.” Blue Cross Blue Shield, the state’s largest insurer, responded by saying Hagan’s comments “are simply not true and she should know better.”


Of course she knows better. She was warned of this precise outcome years ago, but voted with Harry Reid and Barack Obama anyway, like a loyal liberal soldier. She wasn't the least bit concerned about people losing their preferred coverage at the time. Her hollow expressions of concern today are about one thing: Self-preservation. When Hagan ran for her current office six years ago, she slammed her Republican opponent for voting with President Bush 92 percent of the time. That degree of unbending partisanship, she said, "doesn't work" in North Carolina. Hagan has proceeded to vote with President Obama 96 percent of the time. Hagan would prefer not to discuss any of these inconvenient subjects. She's dodged interviews on Obamacare, and literally ran away from reporters' questions yesterday. One local media personality dubbed the performance "the worst-planned presser in political history." But that honor may go to Sen. Mark Pryor (D-AR). Oops:


Yes, the incumbent Democrat accidentally steered voters to his GOP opponent's website. Pryor was attempting to showcase Republican Tom Cotton's "dangerous" record on Medicare, or whatever. Cotton has supported Paul Ryan's bipartisan plan to save the program from impending insolvency, whereas Mark Pryor has supported Democrats' alternative -- namely, offering no ideas and lying about others' reform solutions. The trouble Pryor and his colleagues will run into, however, is that they are the ones who voted for massive cuts to Medicare. Why? To (partially) pay for a brand new, deeply unpopular entitlement program: Obamacare. Democrats then tried to double-count these Medicare cuts as both funding the new law and shoring up the old one, but the same dollar can't be spent twice. When Republicans raised these truths in 2012, liberals brayed that Obamacare's Medicare cuts wouldn't impact seniors, which simply wasn't accurate. It's even less accurate today, as the Obama administration has proposed deeper than anticipated cuts to the popular Medicare Advantage program:


“The final cut may be bigger, as the proposed rate doesn’t take into account adjustments required by the Affordable Care Act,” Michael Manns, a Bloomberg Industries analyst, said in a telephone interview. About 15.9 million people, or about 30 percent of Medicare beneficiaries, are enrolled in Advantage plans this year, according to February data from the government. Next year may mark a turning point: Medicare’s actuaries estimate that enrollment will decline for the first time since 2004 because payment cuts will cause plans to drop out or reduce benefits.


Frightened, deeply cynical Democrats are now demanding that the administration to do away with the scheduled cuts. These would be the same Democrats who attacked Medicare Advantage throughout the Obamacare debate, dismissing the cuts' impact. Now, they're warning of "dire consequences." But guess who voted down Republican attempts to jettison these very cuts back in 2009? Every single Democrat currently up for re-election, including Mary Landrieu, Mark Pryor, Kay Hagan, Mark Begich, Mark Warner, and Mark Udall.