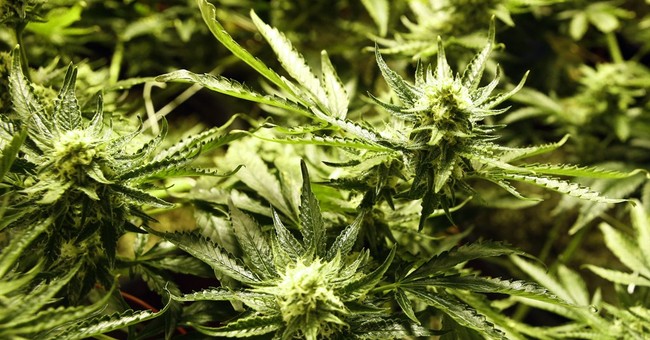 The clip below represents round two of a spat that started last week. Bill O'Reilly is adamantly opposed to marijuana legalization efforts, whereas Mary Katharine Ham is not. During last Monday's exchange, O'Reilly challenged MKH on whether she, as a new mother, would want her daughter smoking weed in her teenage years. Ham answered his question directly (in the negative), then pivoted to her key point: Just because she as a parent may steer her minor child away from engaging in a certain activity doesn't mean that said activity should be illegal across the board. She argued that the drug war -- specifically vis-a-vis marijuana -- raises liberty concerns, hasn't been successful on the merits, and costs a fortune. In response, O'Reilly cut her off, accusing her of "babbling." Needless to say, it was a buzz-worthy segment, and last night brought us an encore performance. The video below begins with O'Reilly's monologue on the issue, followed by his "shoot-out" with MKH. Be sure to stick with it through to the end, lest you miss Ham asking America's top-rated cable news host if he "would like to be a lady of temperance:"

I find myself somewhere in between O'Reilly and Ham's positions in this debate -- which, incidentally, rates pretty low on my priority list in general. O'Reilly's warnings about the eventual impact of legalization on some children and the culture writ large are emotional and vague, but still strike a chord. I don't view broader acceptance and use of marijuana as a societal good. I also believe that increased drug use will have any number of deleterious effects on both a micro and macro level. And yes, for some people, pot is in fact a gateway drug. The host's admonition against bestowing the law's blessing upon yet another socially-acceptable, mind-altering temptation is intuitively reasonable. It's a strain of the "higher pleasures" case some legalization opponents have advanced. In short, I share some of O'Reilly's stated concerns and am more than sympathetic to his overall outlook that increased drug consumption is not a good thing. But his bluster and unsupported assertions don't help his cause. Saying that smoking weed will become so commonplace among kids that it "will be like chewing gum" is silly. His statistic that cases of marijuana addiction as a percentage of teenage users will somehow triple sounded like it was made up on the spot. MKH's side of this dispute appeals less to my sensibilities than it does to my rationality. The "war on drugs" costs taxpayers massive sums of money every year, and just hasn't worked. Law enforcement expends prodigious amounts of time and effort on marijuana -- resources that could, and probably should, be employed elsewhere. But here's the question I asked last night after watching the heated discussion as it aired:


On two separate occasions, O'Reilly states that he has no problem with adults smoking a little dope in the privacy of their own homes. He also concedes that people with painful and debilitating illnesses should be able to obtain marijuana to relieve symptoms. His hobby horse, really, is how changes in the law and culture would impact The Children. Well, legalization laws in Colorado and Washington only apply to adults; marijuana is still very much illegal for minors in both states. (Also, teenagers are famously and universally respectful of drug and alcohol statutes, right?) O'Reilly's position seems a bit incoherent. Yes to (legitimate) medical marijuana and recreational adult use...but no to legalization? How does he square that circle? As best as I can tell, his stance is that the substance should remain illegal, but authorities should simply look the other way in many cases involving adults. Pardon me, but isn't that a form of sweeping, de facto legalization? Doesn't that approach amount to lawlessness that would fail to curtail, let alone stamp out, the black market? I'll leave you with a quotation from the great conservative thinker William F. Buckley, explaining why he both abhorred most drugs and favored the liberalization of certain drug laws:


“First of all, please don’t mistake my position for that of people who are indifferent to drugs. I’m not indifferent to drugs. I think I’ve been quoted as saying if I could turn a single latch which would make all the drugs disappear from the face of the earth, with the exception of here and there, a vineyard in Bordeaux, I would turn that latch. Now, you say is it inconsistent for a conservative to take my position? I don’t think it is, because a conservative seeks to be grounded in reality. That which works is quantifiable; that which simply does not work, isn’t. If you were to pass a law requiring people to go to church on Sunday, it wouldn’t work. Under the circumstances, you would eventually simply withdraw such a law. My position on drugs is that they are, the drug laws aren’t working, and that more damage net is being done by their continuation on the books than would be done by withdrawing them from the books.”


It's a persuasive and elegantly-stated perspective, so kudos to MKH for citing it in her tete-a-tete with O'Reilly. The crux of her argument is that (a) not all inadvisable things should be prohibited by the state, and (b) the empirical results of America's drug war -- at least as currently constituted -- demonstrate that it isn't working well. That should matter from a policy and taxpayer ROI standpoint. O'Reilly is convinced that his opinions will be validated by future studies that will measure and confirm the social decay he predicts will begin to rot away at the culture in places like Colorado. He may be proven correct some day, but for now, the data on the other side ought not be ignored.