Surprise: Obama Administration 'At Least A Month' Behind Schedule on 2015 Budget 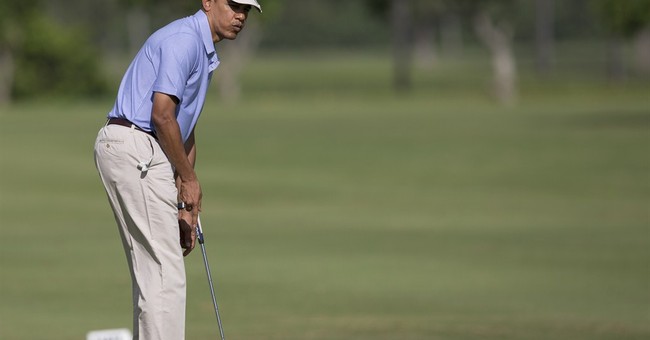 Botched deadlines and sloppy governance are hallmarks of Barack Obama's presidency. Every president is required by statute to submit a budget proposal for the upcoming fiscal year by the first Monday in February. For the fifth time in six years, Obama will fail to meet this core governing responsibility (via Congressional Quarterly):


The White House is said to be at least a month behind its own schedule for developing a fiscal 2015 budget, which by statute is supposed to be submitted to Congress on the first Monday in February. That will slow work on next year’s spending bills, even though the budget accord negotiated by House Budget Chairman Paul D. Ryan, R-Wis., and Senate Budget Chairwoman Patty Murray, D-Wash., established overall discretionary spending levels. There is no penalty for a late presidential budget submission, but appropriators cannot hold hearings until they have a chance to review the administration’s proposals. Last year, Obama’s budget was released two months late, in early April, a delay that factored into Congress’ failure to clear any fiscal 2014 spending bills in 2013.


As the story notes, Obama's FY 2014 budget proposal was submitted two months late; his previous two offerings (both tardy) received a grand total of zero votes in both houses of Congress. Presidents George H.W. Bush, Bill Clinton and George W. Bush produced four delayed budget blueprints -- combined. Obama just hit number five. He's missed more budget deadlines than any president since the current law was passed in the early 1920's. Chalk up another "unprecedented" achievement for Team O. High fives all around. The CQ story goes on to speculate that Senate Democrats will once again shirk their budget duties this year for the explicit purpose of evading tough pre-election votes:


We’ll be watching how much the appropriations timetable slips if the White House Office of Management and Budget fails to deliver its blueprint in February, and the related question of whether both chambers will act on budget resolutions. Ryan has pledged to draft a fiscal 2015 plan, and House Republican leaders may seek to use it in an election year to demonstrate their commitment to keeping spending and taxes in check. The expectation is Senate Majority Leader Harry Reid, D-Nev., will keep a Senate budget deal off the floor, arguing the Ryan-Murray pact makes it unnecessary. Senate debate on a budget resolution could open the door to numerous amendments that the chamber’s Republicans can use to force highly partisan votes just months before the elections.


Harry Reid's Democrats eschewed legally-required budgeting for more than three consecutive years in pursuit of similar political ends. The basic idea was to demagogue Republican budget proposals while depriving the country of any specific counter-proposal. Democrats determined that committing their ideas to paper and allowing the opposition to offer amendments was far too risky, so they deliberately chose to ignore the law. Senate Democrats finally passed a budget last year (coincidentally, a non-election year), which ultimately led to December's uninspiring bipartisan spending deal. Like the Budget Control Act before it, the newly-forged compromise does not constitute an actual budget, dealing instead in top line figures. Democrats have argued in the past that these frameworks render genuine, detailed budgeting unnecessary; they'll likely advance the same argument again ahead of the midterms. Not to fear, though -- Americans can rest assured that the president will at least meet a different critical looming deadline, so there's that. I'll leave you with a delicious little morsel the NRCC mined, in which the president shared a pearl of wisdom with the public this last November:


Now, budgets can be a boring topic – especially on the weekend. But they can also be revealing. Because they expose what our priorities are as a country for all to see.


Indeed they do. And for the fifth time in his presidency, Barack Obama has exposed himself as a chief executive who doesn't respect the process or his duties enough to even produce an on-time budget. Priorities: