Rubio: Let's Face It, Obamacare's Individual Mandate Must Be Delayed 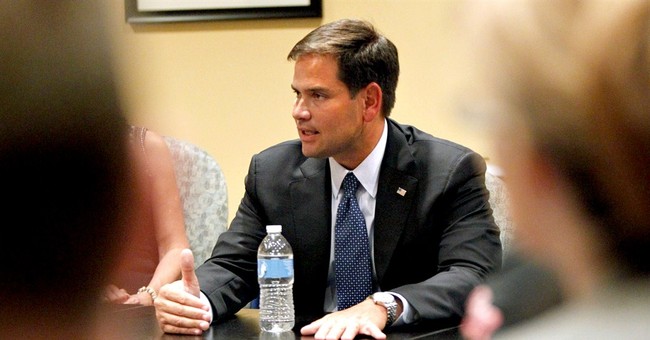 He's (mostly) correct, of course, and even the White House seems to be opening the delay door -- if just a crack. Democrats can stomp their feet about needing more funding (now there's an original idea), but it looks like no amount of cash, experts or surge juju are likely to overcome Obamacare's baked-in timeline realities. NPR reports on the awful corner Team Obama has backed itself into:


They've got a few weeks. But if federal officials can't get the new online insurance marketplace running smoothly by mid-November, the problems plaguing the three-week-old website could become a far bigger threat to the success of the health law, hampering enrollment and fueling opponents' calls to delay implementation, analysts say. "The system needs to be operating reasonably efficiently — I'm not saying flawlessly — before the middle of November," says Sandy Praeger, the insurance commissioner of Kansas, one of the 36 states relying on the federal marketplace because legislators there opted not to create their own state-based market. On Monday, President Obama addressed the problems directly for the first time. "No one is more frustrated than me," he said, promising that technology experts from around the country were working with the administration "to get this working better, faster, sooner." Still, he did not offer details about the scope of the problems, a timeline for the repairs, or the number of people who have successfully enrolled out of the more than 19 million visitors to the federal site. The stakes are huge — and not just because of public opinion, but to ensure broad insurance pools, which are key to the law's long-term success..."If we're not seeing a substantial improvement in the next two or three weeks, we'll be in a bad place," said Dan Schuyler, director of exchange technology at Leavitt Partners, a consulting firm. "We're already behind the curve in getting to that 7 million mark."


These assessments echo those offered by Megan McArdle's expert sources, meaning that Obamacare's "drop dead date" is likely at most three weeks away. The problem? The New York Times and USA Today have each quoted industry analysts who believe healthcare.gov is still many weeks -- months, probably -- away from basic functionality. White House officials won't even commit to saying that the sites will be repaired by March of 2014 -- way, way beyond the point of no return:

Note well that this guy also refuses to say whether anyone will be fired over this debacle. These people just don't do the whole "accountability" thing. Anyway, back to the bigger point: Barack Obama and Democrats in Congress passed a law that requires people to purchase health insurance, or face IRS tax penalties. They've also botched the mechanism for making said purchase so badly that for many people, the law's requirements will kick in before they've even been given a reasonable chance to comply. Aside from being a ridiculous political failure, this is also egregiously unfair and unworkable. Enter Sen. Marco Rubio, who says he'll file legislation that would delay Obamacare's individual mandate tax until Obamacare's website has proven itself to be fully functional for six consecutive months. The reason that I said Rubio was "mostly" right about this is that only delaying the mandate tax (without postponing other key elements of the law) would crash the entire market. Allahpundit explains:


Delay the mandate for months and you’re all but guaranteeing that healthy uninsured people won’t sign up soon, which means insurers won’t have the new revenue they were banking on to cover sick people’s preexisting conditions. Voila — you’ve created the conditions for an industry death spiral. Democrats know it too, just like they also know that they’re not getting anything like single-payer through Congress so long as there’s a Republican majority in the House. So they have no choice but to oppose Rubio’s bill and defeat it in the Senate, even though doing so will make for terrible politics. There are lots and lots and lots of things the public doesn’t understand about ObamaCare, but one thing everyone understands is that it’s unfair to punish people for not doing something the government’s made it all but impossible for them to do. Rubio’s bill essentially forces Democrats to argue that it is fair somehow in the name of keeping the mandate in effect.


Exactly. This bill is a self-created nightmare for Democrats. If they support the bill to avoid getting clobbered by the very "fairness" attacks they love to wield, the death spiral commences. Obamacare collapses, dragging America's health insurance market down with it. If Dems oppose Rubio's plan while explaining (correctly) that provisions like guaranteed issue and community rating would also have to be pushed back to avoid an even worse disaster...then, great. Republicans will say, "we agree, let's delay the whole damn thing -- which, by the way, we've been advising for months now. And the White House compared us to terrorists for even suggesting it. In fact, Democrats chose to keep the government shut down in order to block the very thing they now realize must be done." Lastly, if Democrats decline to act out of hubristic partisan pique, the GOP has a killer talking point to use relentlessly in the lead-up to 2014. (Remember, if Democrats don't take back the House in 2014, Obama's lame duck status starts the day after the election). Obama and friends have put themselves in a no-win situation by passing a terrible law, then compounding the issue by royally screwing up its roll-out. I won't even pretend to shed a single crocodile tear for them. This is completely their fault. Worse, they've known this nightmare was coming for months, yet they foolishly pressed forward, impervious to facts:


Days before the launch of President Obama’s online health ­insurance marketplace, government officials and contractors tested a key part of the Web site to see whether it could handle tens of thousands of consumers at the same time. It crashed after a simulation in which just a few hundred people tried to log on simultaneously. Despite the failed test, federal health officials plowed ahead. When the Web site went live Oct. 1, it locked up shortly after midnight as about 2,000 users attempted to complete the first step, according to two people familiar with the project.


They tested the system with a "few hundred" simultaneous users, it failed, yet they still launched the site. Astounding. They've spent millions promoting a website and roll-out date that they knew wouldn't work, and they continue to do so. Administration allies are desperately trying to pawn this stink-bomb off onto the private sector contractors, but that doesn't fly either. The government chose to act as lead contractor (despite having minimal expertise), hand-selected companies to work with, and avoided seeking additional outside help in order to avoid a political embarrassment. Also, the contractors say they issued one internal warning after another, all of which were ignored. And here we are. Let's hear it, Democrats: Why is Marco Rubio's bill unacceptable?