Yes, I'm going to revisit this theme for a third time.  We appear to be on the verge of launching a military strike against a terrible and ruthless Middle Eastern regime that also happens to be a client of Iran.  Regardless of how effective our attacks may be -- and Assad appears to be hunkering down in preparation -- they will benefit the regime's opposition.  At the Senate Foreign Relations Committee hearing on Tuesday, Secretary of State John Kerry failed to lay out a clear American goal in Syria, and failed to supply a coherent strategy to achieve whatever hazy objectives the administration may have in mind.  Kerry did serve up at least one strong assertion, however.  In regard to reports that the president is prepared to ship heavier weapons to Syrian rebels, Kerry said that concerns about radicals dominating the opposition (as we saw in Libya, with eventual deadly consequences) are unfounded and "not true:"


“I just don’t agree that a majority are al Qaeda and the bad guys. That’s not true. There are about 70,000 to 100,000 oppositionists … Maybe 15 percent to 25 percent might be in one group or another who are what we would deem to be bad guys. There is a real moderate opposition that exists. General Idriss is running the military arm of that,” Kerry continued, referring to General Salim Idriss, head of the rebel Free Syrian Army.

Reuters, a veritable wrecking-ball against White House claims of late, fact-checks Kerry's assertion -- which I've been calling attention to since the words left his mouth.  His assurances are debatable at best:

Secretary of State John Kerry’s public assertions that moderate Syrian opposition groups are growing in influence appear to be at odds with estimates by U.S. and European intelligence sources and nongovernmental experts, who say Islamic extremists remain by far the fiercest and best-organized rebel elements. … U.S. and allied intelligence sources and private experts on the Syrian conflict suggest that assessment is optimistic. While the radical Islamists among the rebels may not be numerically superior to more moderate fighters, they say, Islamist groups like the al Qaeda-aligned Nusra Front are better organized, armed and trained.


Again, as background, see the following:  (1) A June piece about Islamist radicals co-opting and aggressively disarming their moderate counterparts, (2)Foreign Policy's new report that the Free Syrian Army -- on whom Kerry hangs his hat -- being torn asunder, and (3) The Wall Street Journalcolumn from last week arguing that the moderates really are a quasi-reliable and relatively (ideologically) benign fighting force.  The Journal essay was accompanied by a map, approximating the author's assessment of which Syrian elements control swaths of territory within the war-torn nation: 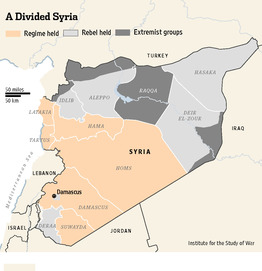 According to this optimistic analysis, the dark gray areas currently held by extremists. Let's say, for the sake of argument, that Kerry is right. Al Qaeda-aligned groups only account for 15-25 percent of rebel fighters in Syria.   If that's the case, they've certainly managed to seize quite a lot of territory already, and that's without the FSA faltering.  I'll close by reiterating a question I've asked several times:  If we're going to equip "the good rebels," how can we vet those recipients and ensure that "bad rebels" don't procure those weapons without boots on the ground?  Assad is atrocious.  So are these monsters.