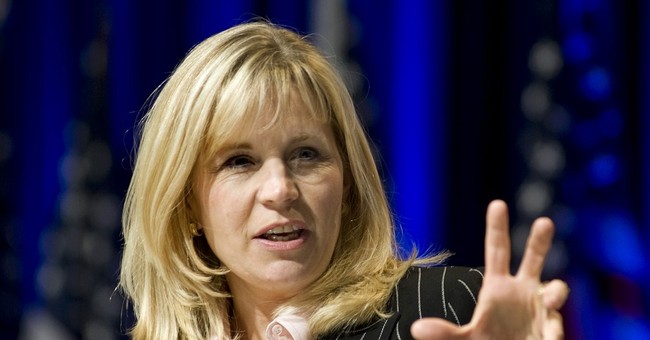 We strongly suspected this was coming, and here it is.  Introducing Senate candidate Liz Cheney (via the Associated Press):

Here's my recent analysis of the dynamics of this no-longer-hypothetical primary race:

What makes this potential internecine contest unusual is that Enzi is generally regarded as a conservative in good standing.  This isn’t a typical “RINO hunt.”  He’s earned a 93 percent lifetime rating from the American Conservative Union, and has matched the average Senate Republican score from Heritage Action.  Enzi recently voted against the ‘Gang of Eight’ immigration legislation.  Jonathan Martin speculatesthat Cheney would run to Enzi’s right on policy issues like the internet sales tax (which has split conservatives), while quietly taking up his left flank on gay marriage.  More than anything, an Enzi-Cheney race would come down to a battle over style and parochial concerns.  Cheney would paint herself as a fresh, invigorated conservative, willing to go to Washington and aggressively oppose the Obama agenda.  As Martin’s piece notes, she might also cite the modern-era tradition that no Wyoming Senator has served more than three terms.  Enzi’s supporters could respond with accusations of carpetbagging and nepotism.  They may tread lightly, though, as to avoid offending the well-liked Cheney family.

And the choice with which Wyoming Republican voters must grapple:

Hawks will likely side with Cheney, with strong social conservatives backing Enzi -- who opposes same-sex marriage, unlike Cheney.  (Incidentally, a prominent pro-life activist tells me he isn't sure where Liz Cheney stands on abortion, and a quick web search didn't immediately answer that question.  Could a pro-gay marriage, pro-choice Republican win a GOP primary in Wyoming?)  In any case, guess who's already aboard the Enzi re-elect train?

Kentucky Sen. Rand Paul told POLITICO Thursday that he considers Enzi “a good conservative,” and said he wasn’t familiar with Cheney’s interest in running against the incumbent Republican. “I don’t know much about her or her politics, really,” Paul said. “I am a friend of Sen. Enzi and while we aren’t exactly the same, I consider him a good conservative.” ... Back in 2010, Dick Cheney endorsed Paul’s Senate primary opponent, Trey Grayson, in an attempt to stop an insurgent viewed at the time as outside the GOP mainstream on national security. Enzi also co-hosted a Grayson fundraiser in Washington D.C. in September of 2009.

History is decisively on Enzi's side as he gears up to defend his seat, but then again, Liz Cheney isn't your average primary challenger.  This will be a fascinating race to watch -- which is a statement rarely made in connection with Wyoming politics.  And despite Alan Simpson's hyperbolic pronouncements, the state GOP will survive no matter who prevails.

UPDATE - This first piece of news won't surprise many people.  The second might:

I'm a big fan of Liz Cheney. But not in this race.


oof RT @jeffzeleny: Enzi reacts: "She said that if I ran, she wasn't going to run...I thought we were friends."

RT @frankthorpNBC: Sen Enzi says that @Liz_Cheney did not call him to say she had decided to run for his seat


Poor form. But this is a point well-taken:


Whatever you think of Cheney, idea that Enzi is somehow entitled to a Senate seat & can't be challenged is absurd.