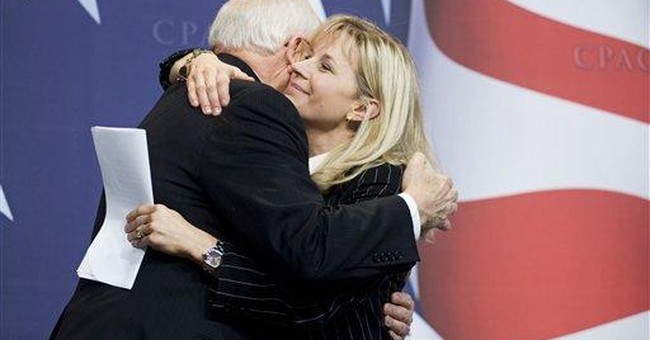 
Ms. Cheney, 46, is showing up everywhere in the state, from chicken dinners to cattle growers’ meetings, sometimes with her parents in tow. She has made it clear that she wants to run for the Senate seat now held by Michael B. Enzi, a soft-spoken Republican and onetime fly-fishing partner of her father. But Ms. Cheney’s move threatens to start a civil war within the state’s Republican establishment, despite the reverence many hold for her family. Mr. Enzi, 69, says he is not ready to retire, and many Republicans say he has done nothing to deserve being turned out. It would bring about “the destruction of the Republican Party of Wyoming if she decides to run and he runs, too,” Alan K. Simpson, a former Republican senator from the state, said in an interview last week. “It’s a disaster — a divisive, ugly situation — and all it does is open the door for the Democrats for 20 years.”

The developments underscore the complicated relationship between the Beltway-centered Cheney family and the sparsely populated state that provided its political base. Dick and Lynne Cheney, who divide their time between McLean, Va., a home on the Eastern Shore of Maryland and a house near Jackson Hole, Wyo., are widely admired here. Liz Cheney, who grew up in McLean and moved her family to the Jackson Hole area last year, is eager to establish her Cowboy State credentials, peppering social media sites with photos of her children’s horse-riding competitions and descriptions of Wyoming as “God’s Country.” Ms. Cheney’s ambitions reflect a greater tension within the Republican Party as a younger generation feels less reluctance to challenge incumbents in the party, especially if they are seen as too consensus-minded or insufficiently conservative.


With all due respect to Alan Simpson, the notion that Liz Cheney getting in the race would devastate the Wyoming GOP for a generation seems a bit silly.  Granted, Simpson knows his home state, but Mitt Romney carried Wyoming with nearly 69 percent of the vote.  Conservative Sen. John Barrasso won with 76 percent of the vote.  One suspects the Republican Party of Wyoming would survive a Cheney candidacy, even as the state's Republican establishment is lining up behind the incumbent.  Bear in mind that this isn't idle speculation based on a handful of Lincoln Day dinner appearances.  Enzi has revealed that Cheney called him to inform him that she's eyeing his seat:

In an interview last week after a town hall-style meeting at the county fairgrounds here, a few feet from a plaque marking the site of Mr. Cheney’s first political speech, Mr. Enzi revealed that Ms. Cheney told him this year that she was thinking about challenging him in 2014. “She called me and said that she’s looking at it,” he said. And did Ms. Cheney ask Mr. Enzi, now in his third term, if he was planning to run again? “No,” Mr. Enzi said...Enzi said he had not recently heard from the man he calls his “good friend."  "I would expect that he’d call before she declares,” Mr. Enzi said of Mr. Cheney.

When I caught up with the former Vice President at an event in DC a few weeks ago, I asked him whether his daughter would jump into the race.  He smiled and said that she was keeping her options open.  The quote above makes it sound as if Enzi has resigned himself to a primary challenge. What makes this potential internecine contest unusual is that Enzi is generally regarded as a conservative in good standing.  This isn't a typical "RINO hunt."  He's earned a 93 percent lifetime rating from the American Conservative Union, and has matched the average Senate Republican score from Heritage Action.  Enzi recently voted against the 'Gang of Eight' immigration legislation.  Jonathan Martin speculates that Cheney would run to Enzi's right on policy issues like the internet sales tax (which has split conservatives), while quietly taking up his left flank on gay marriage.  More than anything, an Enzi-Cheney race would come down to a battle over style and parochial concerns.  Cheney would paint herself as a fresh, invigorated conservative, willing to go to Washington and aggressively oppose the Obama agenda.  As Martin's piece notes, she might also cite the modern-era tradition that no Wyoming Senator has served more than three terms.  Enzi's supporters could respond with accusations of carpetbagging and nepotism.  They may tread lightly, though, as to avoid offending the well-liked Cheney family.  National conservatives appear divided over the eventuality of Cheney's campaign.  Hugh Hewitt is nudging Enzi, 69, to retire:

Jon Kyl set an important example by not running in '12. It helps party and country to retire at the right time. http://t.co/zTQISVx8b5”


Liz Cheney would undoubtedly be a much more strident critic of the Obama administration in Congress than Enzi -- and, as Jim Geraghty points out, her candidacy alone would make many liberals' heads explode.  She's also a conservative woman, which the US Senate is sorely lacking (with a fewexceptions).  But are those cosmetic concerns sufficient grounds to oust a reliable incumbent?  That question may very well be left up to the people of Wyoming on August 19, 2014.
'Frauds': Watch What Happened When Biden Thought the Cameras Stopped Rolling During CNN Town Hall
Leah Barkoukis
Dana Perino Asks Woodward: Why Not Come Forward Sooner if You Were Concerned About Trump's COVID Take?
Cortney O'Brien
BLM Activist Records Herself Berating CVS Manager Because He Called Police on Shoplifters
Julio Rosas
Fact Checking the 'Fact Checkers:' Yes, Politifact, Biden Will Raise Taxes Across the Board
Guy Benson
Commerce Department Announces Ban on TikTok, WeChat From US App Stores
Leah Barkoukis
The Media's Reaction to Kamala's Timberlands Shows How Pathetic Media Bias Has Become
Leah Barkoukis
CARTOONS | Gary Varvel
View Cartoon
Most Popular