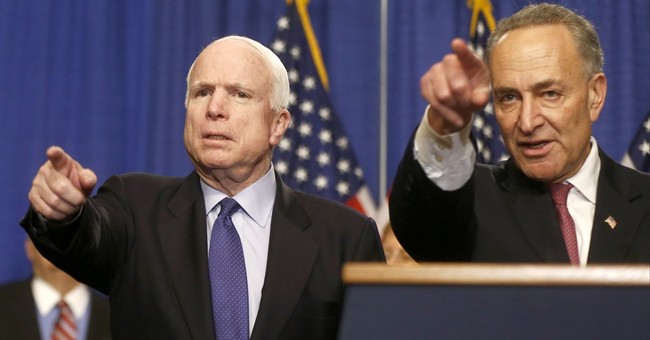 Yesterday was a busy day on the immigration front.  Let's get you caught up.  Earlier in the week, sources close to House Speaker John Boehner were indicating that he would respect the so-called 'Hastert rule' by ensuring that any immigration reform legislation brought to the floor would enjoy the backing of a majority of House Republicans.  On Tuesday, the Speaker confirmed those reports publicly:

Speaker John Boehner (R-Ohio) on Tuesday told GOP lawmakers that he would adhere to the “Hastert Rule” on immigration reform and not hold a vote without the support of a majority of the caucus.  "I don't see any way of bringing an immigration bill to the floor that doesn't have a majority support of Republicans," Boehner told reporters following a closed-door House GOP conference meeting, where he offered a similar message to his members.

That's significant, given what Rep. Tom Cotton told me on Hugh Hewitt's show regarding the prevailing mood in his conference.  If the House GOP is dead set on an enforcement first paradigm, the Senate's theatrics over the Cornyn amendment are essentially academic right now.  Indeed, the gang of eight's enforcement structure seems to be legalization now, enforcement later -- maybe.  National Review summarizes:

Most of the so-called security triggers in the bill are paper tigers. The requirement that those applying for amnesty have clean criminal records in fact allows for two misdemeanor convictions and, like most of the triggers, can be waived by the Department of Homeland Security. Senator John Cornyn of Texas has sought to have those with drunk-driving convictions excluded, but he is meeting resistance — Senator John McCain called the Cornyn amendment, which modestly strengthens other security provisions as well, a “poison pill.” The bill as written excludes only those with three or more drunk-driving convictions — “habitual” drunk drivers.

Likewise, the fines for illegal immigrants contemplated by the Gang of Eight can, under the current bill, be waived by DHS, and the collection of unpaid taxes applies only to levies already assessed by our dear friends at the IRS. The main security provisions of the legislation require only that DHS draw up a plan for security. (That is classic Washington: a plan to have a plan.) The much-vaunted requirement that DHS achieve 90 percent effectiveness for border security requires only self-certification by the DHS; in the unlikely event that DHS does not give itself a passing score, the only result under the law would be the creation of a commission to study the problem. Completing a border fence is left to the discretion of the DHS, which does not support doing so. Likewise, the requirement that the federal government institute a system of controls on those who overstay their visas — which already is a legal requirement and has been since 1996 — is left largely to the discretion of DHS.


Since 1996.  While we're on the subject of previously-required tasks that still haven't been accomplished, Sen. John Thune (R-SD) offered a border fence amendment that would have required the federal government to construct 700 miles of fencing along the southern border, which Congress overwhelmingly mandated in 2007 (the job never came close to completion).  Here's how the sequencing would work: First, 350 miles of the project would be built, followed by provisional legalization for millions.  Then, after the second half of the border fence was finished, the green card process could begin.  The government would thus be forced to produce some tangible results on a dormant project before the "amnesty" stage began, and most provisionally-legal residents wouldn't be eligible for full legalization until the job was done.  Seems pretty reasonable.  The amendment failed 39-54.  Almost every Republican (plus two Democrats) voted in favor, while nearly every Democrat shot it down.  Reid and Schumer were joined by every member of the gang of eight -- Rubio and McCain included -- and Lisa Murkowski.  McCain's vote, while predictable, was uniquely galling in light of this famous 2010 re-election ad.  "Complete the danged fence"?


Rubio issued a statement explaining his 'no' vote (Thune's plan wasn't "specific" enough), but the truth is that none of the 'gang' members are willing to abide a meaningful enforcement-first trigger.  Thune's plan could have been packed full of details, and Rubio still would have voted no.  Rubio has repeatedly stated that the current bill needs more muscular border security provisions -- but not this one, apparently.  None of that will fly in the House as things stand today, which brings us back to my analysis of Democrats' calculus in all of this.  Meanwhile, a new CNN poll shows support for the bill sitting at a tenuous 51 percent, despite a slanted question that (a) mentions border security first, and (b) uses a euphemism for 'illegal immigrants.'  The same survey shows that a super-majority of Americans believe border security should be the government's top priority in crafting immigration reform legislation.  How do the Senate's actions reflect the will of the people?

I'm once again reminded of Rep. Raul Labrador's plan, which is the best idea I've seen to date.  Real enforcement first, followed by a fair and just legalization process for most immigrants who are here illegally.  But if the lukewarm Cornyn amendment is a bridge too far for Schumer and company, Labrador's offering is in a different universe altogether.  The fact that it happens to adhere more closely to the wishes of most Americans than the gang's proposal is somehow reduced to an afterthought.  Finally, the CBO has determined that the gang of eight bill would reduce deficits by nearly $1 trillion over 20 years.  Although there are credible arguments for why reform would boost the US economy, that figure may be a little tough for many conservatives to swallow -- particularly in light of the bill of goods CBO was forced to produce on Obamacare.  Click through for Allahpundit's explanation about how CBO's calculations may be roughly accurate...in the relative short term.