Obama on Surveillance: If Americans Don't Trust Government, "We're Going to Have Some Problems" 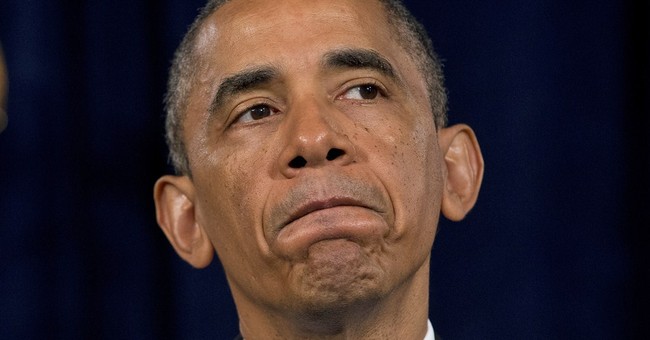 He's right to a large extent, but I'm not sure framing things this way is quite as virtuosic as he might think:

"If people can't trust not only the executive branch but also don't trust Congress, and don't trust federal judges, to make sure that we're abiding by the Constitution with due process and rule of law, then we're going to have some problems here." Obama added that the National Security agents behind the surveillance programs "cherish our Constitution...You can shout Big Brother or program run amok, but if you actually look at the details, I think we’ve struck the right balance,” he explained.


The president went on to say the following about the choices we face as a nation: “You can’t have 100 percent security and also have 100 percent privacy and zero inconvenience,” he continued. “We’re going to have to make some choices as a society."  I agree, but candidate Obama was a persistent critic of his predecessor's wrestling match between security and liberty, frequently labeling it a "false choice."  Now he's fully adopted the "choice" paradigm, and is defending it vigorously.  What does that choice entail?  The United States of America faces grave, innumerable, and constant threats from foes, known and unknown.  The men and women tasked with keeping the rest of us alive shoulder that burden every single day.  I can't imagine it, frankly.  In an increasingly wired (and wireless) world, our best and brightest quietly toil to keep our security tools slightly ahead of technology's cutting edge.  Rest assured that our adversaries are doing the same.  As a result of these efforts, they've quite literally tapped into a genuinely awesome amount of data.  Has access to said data helped keep us safe?  It appears so.  But is the accompanying widespread loss of liberty -- current or potential -- worth it?  My inner libertarian screams, "hell no."  By the same token, let's say the president had dismantled or scaled back some of these programs, then we got hit hard again.  If it later emerged that the president had done away with intelligence-gathering methods that could have prevented the bloodshed, wouldn't many of us be furious?  This is the balancing act to which Obama refers. These are the choices he disdained as a Senator but has since embraced as president.

As citizens, we must decide whether our leaders have chosen wisely.  In the case of the NSA 'metadata' gathering, every single one of us is affected, but the contents of our communications aren't monitored.  According to people who know what they're talking about, this program -- which spans two administrations and more than a decade -- is a "vital" tool in our arsenal.  It makes me uncomfortable, but I'm not sure I oppose it outright.  As for PRISM, we're just beginning to learn about that enormous data mining operation.  Its ability to review actual content like photos, videos, Skype conversations, and beyond is extremely disquieting.  It's the veritable definition of Big Brother.  The government tells us PRISM isn't being leveraged to intentionally or specifically target Americans.  I want to believe them.  But even if they're being mostly truthful, the ways in which PRISM's capabilities could be misused are obvious and frightening.  Given the current climate of scandal, abusive targeting, and maddening opacity from the administration, many Americans' capacity to trust the government is being pushed to the brink.  For instance, like most Americans, I'm generally supportive of the Pentagon and CIA using drone strikes to take out Al Qaeda leadership, within certain limitations.  It's a way to keep us safe and to visit justice upon wanton killers and thugs.  But then I read stories like this, and my conscience stirs.  I similarly appreciate the president's point that some of the recently-divulged (or re-divulged) programs operate with both Congressional and judicial oversight.  That's important.  But members of his own party have pointed out that he wasn't fully accurate in his statement and suggest that laws are being violated.  I'm momentarily relieved when the president assures us that "nobody is listening" to our telephone calls.  But then I recall that no one is actually leveling that accusation. Most Americans are comfortable with the government keeping certain secrets out of the public eye, but that comfort is reliant on a baseline of trust.  And that trust is evaporating.  Perhaps venerable Washington newsman Ron Fournier captures my sentiments best:

Obama himself channeled Orwell on Friday while defending the secrecy surrounding the spy programs. "Your duly elected representatives have consistently been informed," he said. In other words, trust Washington.Three problems with that logic: Americans don't trust government; an overwhelming majority of lawmakers were never told about the program; and members of Congress who were privy to intelligence "briefings" say their knowledge was limited.  Look, it's a dangerous world. Obama and his team need to get their hands dirty to protect us. As terrorists grow more dangerous, we need to consider using the flexibility of the Constitution to adapt. But the mandate to keep Americans safe is no excuse to keep them in the dark.

Fournier concludes that the administration's depth of secrecy and non-transparent spin on a host of issues is lending momentum to the toxic narrative I've been discussing all week.  Many Americans, Fourier writes, now view the federal government as "intrusive, Orwellian, incompetent, corrupt, heartless, secretive, and not to be trusted."  Indeed. The events of the last month have been a nonstop real-time advertisement in favor of limited, smarter, more restrained federal power.
UPDATE - I think it's important to reiterate a point I made yesterday.  The president undercut his rationale for maintaining these programs in his speech at NDU last month.  You can't argue that these pervasive measures are necessary, but "large scale" threats are no longer an issue.


The National Security Agency has at times mistakenly intercepted the private email messages and phone calls of Americans who had no link to terrorism, requiring Justice Department officials to report the errors to a secret national security court and destroy the data, according to two former U.S. intelligence officials.