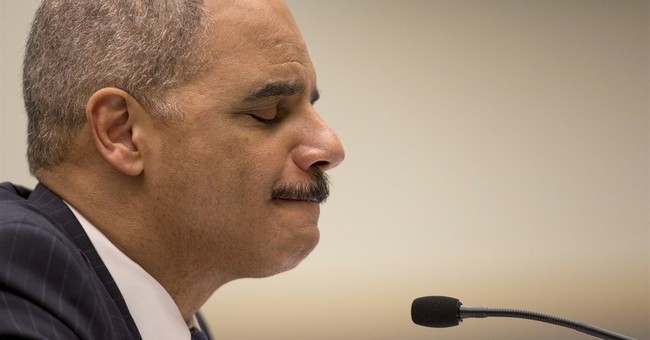 Attorney General Eric Holder signed off on a controversial search warrant that identified Fox News reporter James Rosen as a “possible co-conspirator” in violations of the Espionage Act and authorized seizure of his private emails, a law enforcement official told NBC News on Thursday...The law enforcement official said Holder's approval of the Rosen search, in the spring of 2010, came after senior Justice officials concluded there was "probable cause" that Rosen's communications with his source, identified as intelligence analyst Stephen Kim, met the legal burden for such searches. "It was approved at the highest levels-- and I mean the highest," said the law enforcement official, who spoke on condition of anonymity. He said that explicitly included Holder.


As you'll recall, the Obama/Holder DOJ treated Rosen as a criminal co-conspirator in order to secretly gain access to Rosen's personal email as well as phone records on up to 30 separate lines -- including Rosen's personal cell number and the home phone of his parents.  The disclosure of Holder's role in the case broke just hours after President Obama delivered a wide-ranging speech on national security and counter-terrorism policy, during which he said the following about press freedoms:

Journalists should not be at legal risk for doing their jobs. Our focus must be on those who break the law. That is why I have called on Congress to pass a media shield law to guard against government over-reach. I have raised these issues with the Attorney General, who shares my concern. So he has agreed to review existing Department of Justice guidelines governing investigations that involve reporters, and will convene a group of media organizations to hear their concerns as part of that review. And I have directed the Attorney General to report back to me by July 12th.


Attention, America: Eric Holder -- the man who authorized a truly shocking and intrusive warrant designed to pry into the news-gathering methods of a journalist -- "shares the president's concerns" about freedom of the press.  Good to know.  And aren't you comforted that Holder has been tasked with reviewing...his own actions and "reporting back" to his boss by mid-summer?  Slate's Dave Weigel wins the day with this headline: "Eric Holder Will Lead Investigation Into Journalist Warrant That he Approved."  What a farce. Obama has unwaveringly expressed full confidence in Holder, even after his amnesia- and ignorance-addled testimony last week.  The last few weeks have prompted low murmurs among influential Democrats about dumping Holder.  Let's see if this revelation nudges him closer to the path of Obama's proverbial bus.

There were reports floating around last week that Holder would have signed off on the DOJ's lengthy fishing expedition against the Associated Press because protocols require the Attorney General to do so.  Holder was able to deflect those questions and criticisms by citing his recusal from that particular investigation -- which he could neither verify, nor even remember when exactly it happened.  (His rationale for the extraordinary measures in that instance has subsequently been debunked by media reports).  No such luck this time; he's knee-deep in the Rosen affair. Time for another hearing?  Also, NBC's source says the decision to surreptitiously and intrusively monitor James Rosen was approved at the "the highest levels."  He or she confirmed that this includes Holder.  The New Yorker's Ryan Lizza asks the obvious follow-up question:


Very important question: did Holder or anyone else at DOJ inform the White House of the Rosen warrant?


Did the supposed firewall between this DOJ's investigations and the White House hold firm, or might a few flames have burned through?  I'll leave you with NBC newsman Chuck Todd's thoughts on the Obama administration's posture toward the first amendment and journalistic freedoms:


"You can’t look at this and see it as anything other than an attempt to basically scare anybody from ever leaking anything every again. So, they want to criminalize journalism, and that’s what it’s coming down to. If you end up essentially criminalizing journalism when it comes to reporting on the federal government, particularly on national security, and the only place they think they technically can do that is on the issue of national security, what it’s going to do is the impact that we’ve heard the council say this over the weekend: It is going to make whistleblowers and people that might leak and regular sources."

James Goodale, the First Amendment lawyer who represented the New York Times in the Pentagon Papers case, wrote the following this week: "The search warrant filed to investigate the Fox News reporter James Rosen proved as many had suspected: President Obama wants to make it a crime for a reporter to talk to a leaker. It is a further example of how President Obama will surely pass President Richard Nixon as the worst president ever on issues of national security and press freedom."