Video: During Counterterrorism Speech, Woman Heckles Obama For Agreeing With Her 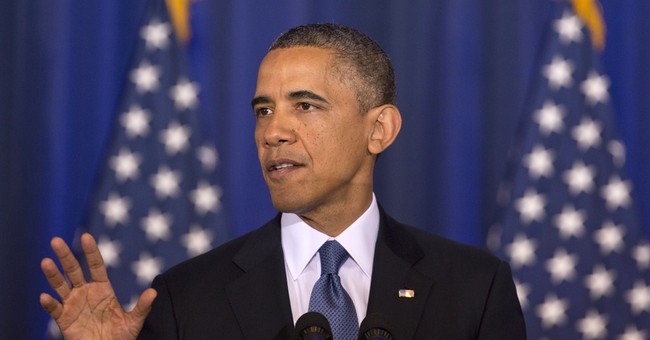 President Obama delivered a "major" address on US counter-terrorism policies today at the National Defense University in Washington.  It was largely devoid of any real news.  The professorial president (a) spoke contemplatively about interest balancing -- some instances of which pose legitimate quandaries -- (b) defended his administration's heavy use of drone strikes as an effective, legal and proportional means of fighting terrorism, and (c) renewed calls to close the terrorist detention center at Guantanamo Bay.  As I said, nothing new.  The speech was a blend of sound policy, thoughtful analysis, rank hypocrisy, bad ideas and occasional incoherence.  It was framed as an attempt to break free from both the Clinton administration's pre-9/11 mentality that left us vulnerable to attack, and the post-9/11 mindset of the Bush administration.  Unsurprisingly, Obama touted his abolition of so-called "torture" (without mentioning that some of the now-proscribed harsh measures helped break the mastermind of 9/11 and bring Osama bin Laden to justice).  He also vigorously justified using a drone strike to kill Al-Qaeda leader and US citizen Anwar al-Awlaki.  He did not mention the other three Americans that have met the same fate.  If Obama hoped his remarks would shift the narrative away from his administration's scandals, I'm skeptical he'll succeed far past tonight's evening news.  I more or less agree with this:

This speech will be forgotten in three hours. Distraction over.


What might have slightly more staying power is the extraordinary spectacle of the president getting repeatedly and loudly interrupted by a (fairly well known) Code Pink heckler, and actually engaging her to a limited extent:

She came back for more.  Twice.  Her final disruption included a riff about Awlaki's 16-year-old American citizen son, who was also liquidated via drone, and whom the president failed to mention in his prepared remarks.  What's weird is that she was heckling Obama to take an action that he's been discussing and trying to bring about since 2007.  He agrees with her.  Most Americans, however, disagree with both of them.  A new poll shows that nearly two-thirds of the public support keeping Guantanamo Bay prison open. This is where the US houses the most dangerous captured terrorists in the world.  Many of them hover in a difficult legal gray area.  They're too dangerous to set free (the recidivism rate of released Gitmo detainees is alarming), but they're too difficult to convict, given the shadowy nature of terrorism and complexity of asymmetrical warfare.  Bipartisan majorities in Congress have routinely denied Obama the funding and authority to shutter the facility and relocate the combatants to US soil.  The also president announced a decision to lift the ban on prisoner transfers to Yemen, which is a terribly unstable place that cannot be counted on to keep dangerous people locked up.  Does Obama believe Yemen is more secure and stable today than it was in 2009, when the moratorium went into effect?

Despite his muscularity on drones, Obama underscored his preference to treat terrorism like a law enforcement exercise, including civilian trials for radical combatants.  This is wrong-headed for many reasons, one of which is the apparent fact that at least five Benghazi terrorists still walk the streets as free men because Obama has evidently decided he can neither drone them nor convict them.  Ultimately, the path forward charted by the president today was largely premised on the proposition that "large scale" Al Qaeda attacks on the homeland are a thing of the past.  The American people surely hope that's the case.  But do they believe it?