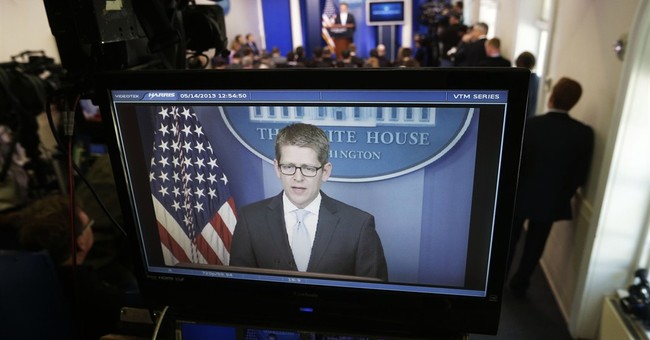 More information seeps out, and the "official" story changes again.  Knock me over with a feather:

Even MSNBC can't fully turn a blind eye to how things seem to keep "evolving" in the briefing room these days.  So we're clear, Carney's new version of events is that top-level White House officials knew about the Inspector General's investigation into the IRS for some time, but chose not to inform the president about it.  He claims that President Obama's chief of staff, top lawyer, and Treasury Secretary all knew this political megabomb was about to detonate, but decided their boss didn't need to know about it.  I'm...struggling to believe that, but at least it's spawned an amusing Twitter hashtag, #WhatArentTheyTellingObama.  Just to keep the "who knew what?" inquiries straight, there are two basic questions pertaining to White House knowledge of the IRS scandal that remain unresolved, both of which have inched closer to the president's door in recent days.  The first involves when Team Obama -- within the administration or at the campaign -- first knew about the practice of IRS targeting.  Carney and the president were both a bit cagey on this point last week, then numerous media outlets reported on Friday that high-ranking administration officials at Treasury found out about the targeting scheme in June of 2012.  That would be roughly six months before the election, in case that wasn't clear.  Did Treasury brass fail to impart that knowledge to anyone else?  Really?  The second question is when, specifically, the president himself knew about the Inspector General's report (and therefore, the scandal).

Obama has intimated that his first whiff of the entire scandal came in the form of media reports two Fridays ago.  Even if Obama wasn't aware of the scheme before the election (I'm not fully convinced of this), doesn't it seem suspicious that virtually everyone around him did know about the impending IG findings, yet he was scrupulously frozen out of the loop?  Carney acknowledged that Obama has repeatedly met with in-the-know subordinates over the last month, insisting that none of them breathed a word about it (and for or another interesting wrinkle about Obama's appointment schedule and the IRS scandal, read this).  If that's the case, it looks like the White House has been working awfully hard to insulate the president from some real nastiness -- which begs the question posed in the above hashtag.  Cloistered aloofness doesn't look great on any president; it's possible that the White House has concluded it's still the least damaging posture for him to adopt.