Report: Two Accused Tsarnaev Accomplices are in US Illegally 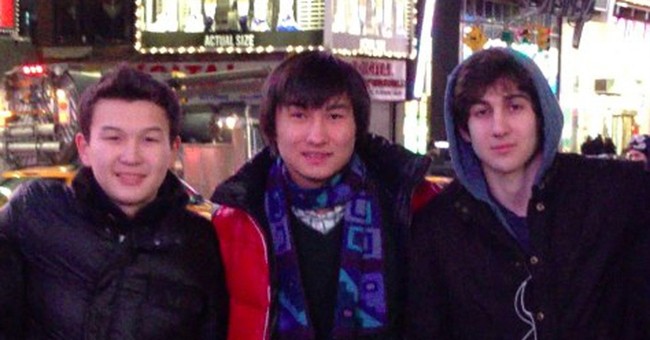 Two of the three men taken into custody today in connection with the Boston marathon bombings are being charged with obstruction of justice, having allegedly helped destroy or hide evidence that could further implicate their friend, Dzhokhar Tsarnaev.  The two non-citizens are also in the United States unlawfully, and one even managed to re-enter the country in late January despite his illegal status.  CNN's Jake Tapper reports, first on the apparent crime itself:

A U.S. government official tells CNN that the three students in law enforcement custody Wednesday are two students from Kazakhstan, Dias Kadyrbayev and Azamat Tazhayakov, and another student, U.S. citizen Robel Phillipos. The official says that their case reveals more holes in information sharing. Kadyrbayev and Tazhayakov are being charged with obstruction of justice. Complaints from the U.S. Attorney Office say they helped destroy evidence that might further implicate Dzhokhar Tsarnaev in the April 15 terrorist attacks at the Boston Marathon, namely disposing of a backpack containing fireworks and a laptop belonging to Dzhokhar Tsarnaev. The complaints say Kadyrbayev and Tazhayakov "admitted that they agreed to get rid of [the backpack] after concluding from news reports that Tsarnaev was one of the Boston Marathon bombers."

That final, important detail differs from their previous claim that they agreed to ditch Dzhokhar's items without understanding the full context of his request.  Allahpundit explains why that excuse wouldn't have washed anyway: "There’s really no innocent explanation for doing a friend a solid when he asks you to throw his computer in the trash right away and no, he won’t be around for awhile to do it himself."   Onward, to the immigration angle:

Kadyrbayev, Tazhayakov and the third student were interviewed by the FBI on Friday, April 19, four days after the bombing, after law enforcement learned the identity of the Tsarnaev brothers. The interview, the official said, lasted late into the evening and into Saturday morning. But there wasn’t enough evidence to charge them with a crime. It wasn’t until the Department of Homeland Security’s Immigration and Customs Enforcement division heard about the interviews later on Saturday that they realized Kadyrbayev and Tazhayakov were not currently of legal immigration status, and ICE officials went to pick them up and detain them.

The first US government official told CNN that at an immigration court hearing this morning, the court learned that Tazhayakov returned to Kazakhstan in December 2012, and his status with U. Mass-Dartmouth was terminated on January 3. Yet somehow he was allowed to return into the U.S. on January 20. “They shouldn’t have let him in,” the first official told CNN. “Bells should have gone off.”

They shouldn't have, but they did.  How many more of these "bells" also haven't gone off across the country, one must wonder?  Which brings us to our political Rorschach test of the week:  Do these new developments prove that immigration reform is urgently needed, or that we should slow things down and view the effort more skeptically?  Both sides of this debate will seize on today's report as vindication for their agenda, but it'll be interesting how the public reacts.  'Gang of Eight' supporters will point out that their bill mandates beefed up visa tracking at entry/exit points across the country, which theoretically would have blocked Tazhayakov from re-entering the US a few months ago.  Opponents will correctly note that a robust regime of increased visa enforcement was passed by Congress 17 years ago (and reaffirmed several times since), but hasn't been properly enforced.  Pass all the laws you want -- if the federal government can't or won't enforce them, what's the point?  To that end, it looks like Marco Rubio is inching closer to backing more stringent border security measures these days, admitting candidly that his own bill probably doesn't stand a chance of passing the GOP-held House.  And since we've already touched on two hot-button issues in this post -- terrorism and immigration -- why not toss in a third?  Seventy percent of Americans support the death penalty for Dzhokhar Tsarnaev if he's convicted, including large majorities of Democrats, Independents and Republicans.  The only group that's even close to evenly split?  African-Americans, with a 52/43 spread in favor of executing the terrorist suspect.

UPDATE - In case you missed it yesterday, the Tsarnaev family reportedly received more than $100,000 in taxpayer-funded welfare assistance over the years, including $5,500 in college aid for Tamerlan.  You're welcome, guys.