Solyndra Scandal Deepens -- Plus: Headline of the Day

You're already aware that Solyndra -- a California manufacturer of solar panels -- has filed for bankruptcy and laid off all of its workers, despite half-a-billion dollars in federal (read: taxpayer) "stimulus" loans.  Prior to its demise, President Obama had touted Solyndra as a successful monument to his "green jobs" agenda.  These facts alone would be embarrassing enough for the administration.  But as the week has worn on, the bad news continues to spiral.  Yesterday, the feds raided Solyndra's headquarters for unspecified reasons, although it's reasonable to assume they were seeking evidence of financial impropriety:

FBI agents on Thursday executed search warrants at the California headquarters of Solyndra LLC, which was awarded more than $500 million in federal stimulus loans in 2009 to make solar panels in what the Obama administration called part of an aggressive effort to put more Americans to work and end U.S. dependence on foreign oil.

But the firm filed a bankruptcy petition Tuesday in Delaware, shedding more than 900 full-time employees and leaving just a “core group” of 113 employees, according to bankruptcy records.  FBI spokesman Peter D. Lee said multiple search warrants were served at the company’s Fremont headquarters in what he called a joint investigation by the FBI and the Energy Department’s office of inspector general. But he said he could not provide any details about the ongoing probe.

Officials from the Department of Energy have for months been sitting in on board meetings as "observers" at Solyndra, getting an up-close view as the solar energy company careened towards bankruptcy after spending more than $500 million in federal loan money.

Word of the Energy Department's unusual arrangement came as federal agents on Thursday converged on the California headquarters of the failed solar company, focusing fresh attention on the first corporate beneficiary of President Obama's stimulus program to create new clean energy jobs.  The company, which closed its doors last week and laid off 1,100 workers, has been a subject of an ongoing series of stories by the Center for Public Integrity's iWatch News in collaboration with ABC News.


Great. Administration flacks had front-row seats to this mess, and now US taxpayers may be on the hook for hundreds of millions in losses:

Questions about the loan have been simmering for months. In 2009, the Energy Department put Solyndra's application on a fast-track for approval, and announced the award with great fanfare. The generous terms of the government loan included the lowest interest of all the green projects benefitting from Energy Department help, iWatch News and ABC News found.

And as part of the deal, the Energy Department agreed that if the company went bust, private investors could recoup their losses before the government. Republicans in Congress called the investment "a bad bet" and said it "put taxpayers at unnecessary risk."  In Washington, the crash of the politically-connected firm has unleashed a barrage of fresh questions from House and Senate investigators, who want to know what can be done to recover the losses for the taxpayers.


Is the White House the least bit repentant for making a reckless "stimulus" loan to a company that just happened to fit their unrealistic and failing green energy/jobs agenda?  Nah:


Hey, they did their (fast-tracked) due diligence; sometimes these things just don't work out.  What's half a billion dollars among friends?  The best news is that President Obama has just proposed a new $450 Billion re-election strategy jobs plan that will push even more money out the door in a desperate big government attempt to boost demand.  What could go wrong?  The media is already in hacktastic cheerleader mode.  Get a load of this gloriously biased headline: 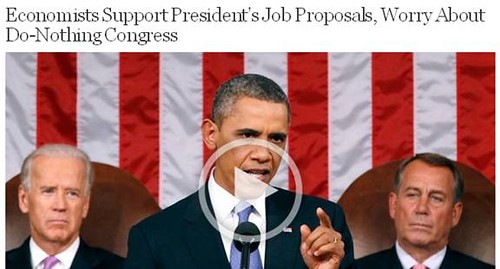