Should the US Release Photos of Bin Laden's Corpse?

Guy Benson
|
@guypbenson
|
Posted: May 02, 2011 1:43 PM
Share   Tweet
We've all seen the fake image that rocketed across the internet last night, but US officials say they have the real deal.  According to ABC News, a debate is underway among top administration officials over whether to share photographic evidence of bin Laden's execution with the public:

The Obama administration has photographs of Osama bin Laden’s dead body and officials are debating what to do with them and whether they should be released to the public, officials tell ABC News.

“There’s no doubt it’s him,” says a US official who has seen the pictures and also reminds us that OBL was 6’4”.

The argument for releasing them: to ensure that the public knows and can appreciate that he's dead. There is of course skepticism throughout the world that the US government claim that it killed bin Laden is true.

The argument against releasing the pictures: they’re gruesome. He has amassive head wound above his left eye where he took bullet, with brains and blood visible.

In my mind, the former consideration far outweighs the latter.   Of course the image of bin Laden's bloodied face will be gruesome.  So were the monstrous acts of murder he ordered across the globe throughout his dastardly career.  Releasing clear evidence of his death isn't about morbid curiosity or revenge.  It's about confirmation.  The American people deserve to know beyond a shadow of a doubt that the man most responsible for the slaughter of nearly 3,000 of our fellow countrymen nearly a decade ago is gone forever.

UPDATE: ABC News has an exclusive slideshow of images from inside bin Laden's compound.  Lots of blood, but no bodies: 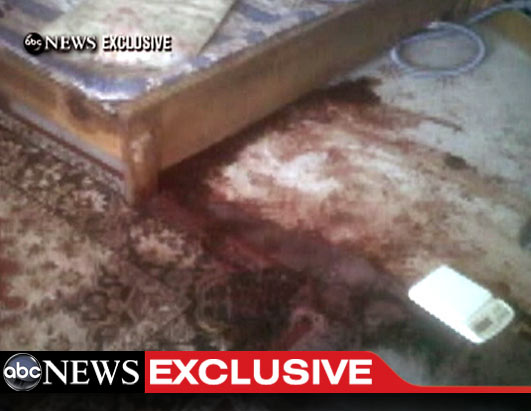