The political and legal teams for Republican Meg Whitman say they think they have identified the former employee who will appear with Gloria Allred at a news conference Wednesday morning to discuss her employment with the Whitman family.

"Based on the limited information that we have, we believe we know who this former employee is," said Whitman spokesman Rob Stutzman, who declined to release a name before the press conference.

Whitman attorney Tom Hiltachk told reporters Wednesday: "This person was initially hired by Meg Whitman in November 2000. She filled out standard [Internal Revenue Service] forms and Department of Justice forms and presented her Social Security card and California driver's license. She filled out immigration forms that stated under penalty of perjury that she was a lawful resident."

Hiltachk said this woman "worked for the Whitmans for about nine years."

"On June 20, 2009, this person came to Ms. Whitman and confessed that she was not a legal resident of the U.S. She was immediately suspended and terminated on June 29, 2009," Hiltachk said.

Minor detail: Allred has been a major donor to Jerry Brown, Whitman's opponent, since the 1980s.Innocent question: If this housekeeper is going to claim to have been poorly treated or abused by Whitman, why did she stick around Chez Whitman for nine years, starting in 2000?  Perhaps this accuser started feeling mistreated, oh,  right around the time Whitman fired her.Obvious question: And even if the supposed abuse did occur, why wait to level these claims until this particular moment?  (Answer: Just Ask Arnold):

This is not the first time Allred has injected herself into a campaign in the closing days. In 2003, a former stuntwoman hired Allred to pursue claims of sexual assault and defamation against now-Gov. Arnold Schwarzenegger. That suit was dismissed.

Political. Hack.UPDATE: Boom--Whitman's campaign drops full documentation backing up their side of the story over at TMZ.UPDATE II: Whitman's accuser is Nicky Diaz Santillan, her former maid.  She did a great job of pretending to weep at the press conference, where she said she felt ""exploited, disrespected, humiliated and emotionally and financially abused" by Whitman--who paid her....$23 per hour . 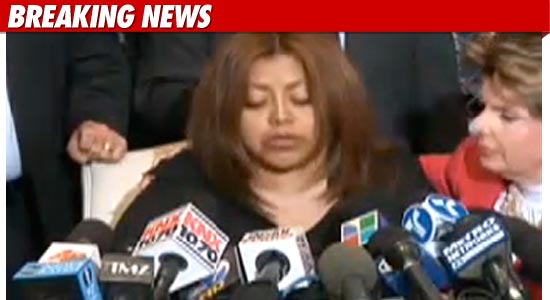