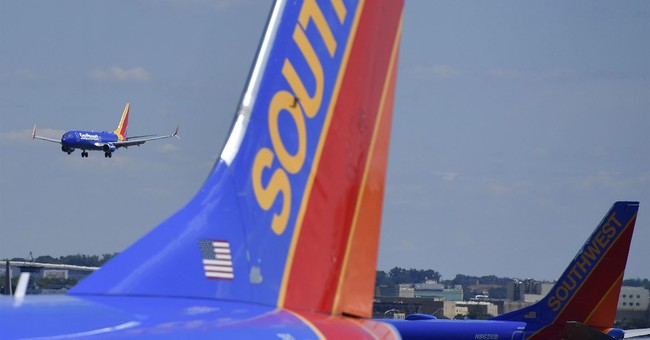 Southwest Airlines is in hot water, once again, after a passenger was removed from a flight on Tuesday for allegedly violating mask restrictions.

The passenger, a Black man in a 'Black Voices for Trump' hat, donning a Trump face covering, lowered his mask once seated in order to eat a snack – a bag of peanuts – something he and other passengers understood to be allowable.

Video shows the man in a middle seat with no passengers seated directly next to him. An official from the airline in a blue mask is then shown approaching him and telling him he wasn't going to be taking off on this flight and needed to exit the aircraft.

So a young black man wearing a @realDonaldTrump mask, is #harassed by a @SouthwestAir employee because he’s eating on the flight. Witnesses report the man only removed the mask to eat. #MAGA #Trump2020 pic.twitter.com/cRDP4UMI5N

Witnesses in the video came to the man's defense, saying that he was in fact wearing his mask until he lowered it in order to snack on peanuts while safely in his own seat. On the video, other passengers gestured toward a flight attendant at the front of the aircraft and said that the ejection had nothing to do with mask policy.

There’s more video... This does not look good at all @SouthwestAir! Comment? Glad this lady stood up for the man. pic.twitter.com/GAZTFh5rcd

Other passengers repeatedly asked the Southwest official to state the airline's policy that led him to be forcibly removing a passenger from their flight. But no clear answer was given.

"This is not a publicity stunt," one woman said as the man was removed from the plane. She then turned her questioning to the airline employee.

"Do you follow your policy indiscriminately and impartially or do you just do this for people whose message you don't like?" She did not get an answer.

In a statement to the Washington Examiner, Southwest said that the man was removed after repeatedly being told he must wear a face covering.

Our reports indicate that a Customer traveling on Flight 2632, with scheduled service from Tampa to Dallas, was asked repeatedly by more than one Employee at different times to wear a face mask. The Customer did not comply with our Crew’s multiple verbal requests — including while boarding the flight before seated. Therefore, the decision was made to return to the gate and re-accommodate him on a later flight to his final destination after receiving assurances he would comply with our face covering policy. We regret the inconvenience the situation created for all involved, but our Crew must uphold the well-being and comfort of all Passengers.

Voices in the video clearly indicated that the man was wearing a face covering until he lowered it for the snack. Donald Trump, Jr. expressed his own disbelief at the incident, saying he had just been on a Southwest flight and everyone was allowed to remove their mask to eat or drink.

WTF??? This is disgusting. I’ve been on a thousand flights in the last few months and everyone lowers their masks to eat and drink. I did it on a southwest flight earlier this week. https://t.co/yQxUcbduwp

Southwest was roasted by conservatives last year after an employee posted a photo and scathing remarks about a passenger who supported President Trump. Even as the story of Tuesday's removal of a Black Trump supporter remains viral on social media, Southwest has yet to make a public statement on their social accounts.