Concerned Supporters Turn out for the President in Droves 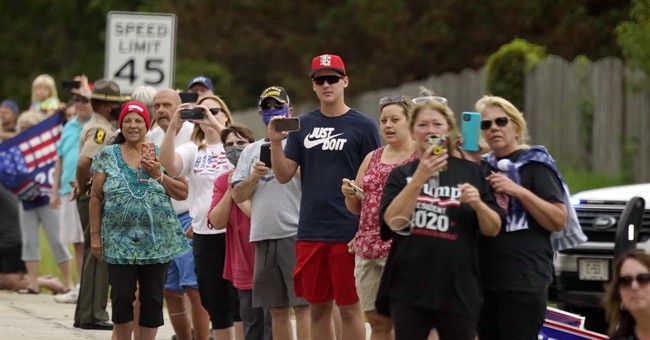 President Trump has postponed his campaign rallies until further notice as he recovers from COVID-19 but his stay at Walter Reed Medical Center did not stop his supporters from showing their love and encouragement.

Just hours after the president landed in Marine One at the hospital in Bethesda, Maryland on Friday night, supporters began gathering at the gate to Walter Reed, which was roped off and tightly monitored by police and secret service. News cameras stationed near the entrance captured the moments as at first one, then two, and then several supporters gathered in the brisk October air with Trump flags, American flags, and personalized "get well" signs.

Police initially told them to disperse, but as more and more gathered to cheer for the president and encourage his recovery, the group was permitted to wave their flags and wish the president "get well soon." Through the night, dozens gathered, and either the president saw them or heard about them because his chief of staff, Mark Meadows, arrived bearing chocolate as a thank you directly from the president.

As night turned to day and the president's doctor briefed the nation on his condition, many more people had gathered waiving and hoisting their messages of love and support for the President of the United States. It wasn't one of his now-famous packed rallies at an airport hanger with Air Force One proudly gleaming in the background, it was a rally for the health of the president.

But the enthusiasm for the president was not diminished, despite reports in the media that his illness would derail his campaign. His supporters may not have been able to deliver cards and flowers but they gifted the president with something much better: love, support, and prayer.

NOW: If @realdonaldtrump looks out his window at Walter Reed @CBSNews pic.twitter.com/BXj5hzJ1Bf

As the second day of Trump's hospitalization again drew to a close, many people prayed for the president's recovery, even bringing Bibles to the hospital gates. Mollie Hemingway of The Federalist dropped by on Saturday night to talk to supporters.

I’m here at Walter Reed where hundreds of Americans have gathered to wish President Trump well during his hospitalization. pic.twitter.com/ffJNm0B4kg

And even in Bethesda, Maryland, in a solidly Democratic voting district and border town to Washington, supporters drove by to show their encouragement and cheer on the president.

Yes, a few middle aged white women flipping off those gathered, or people driving by with Biden signs, but overwhelming support from those driving by. Lots of honking and cheers pic.twitter.com/tdrvuenIxr