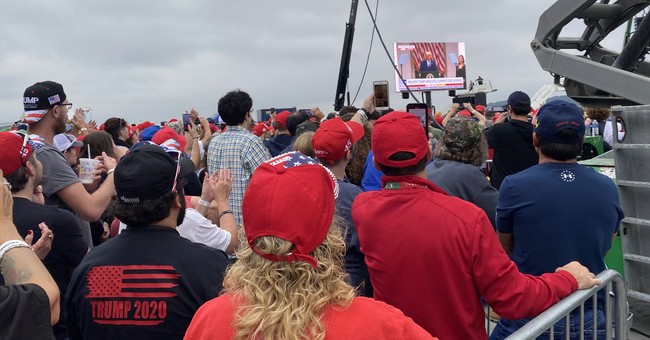 Middletown, Pennsylvania – The airport tarmac at Harrisburg International Airport was packed with enthusiastic supporters of President Trump on Saturday night. The sky was grey but the mood was jubilant as people filled the risers and packed into the sectioned-off tarmac in front of the AvFlight terminal.

The president was still hours away from his scheduled appearance in Pennsylvania for a campaign rally as he took the podium in the White House Rose Garden to officially nominate Amy Coney Barrett to the United States Supreme Court.

Rally attendees felt mostly confident throughout the day that the president was going to announce Barrett as his choice to replace the late Justice Ruth Bader Ginsburg, but some felt that Trump could still throw a curveball.

"I think it could be [Allison Jones] Rushing," one man said just moments before the big screen TV beamed the live stream from the Rose Garden.

Others felt confident that Trump was set on Barrett from the beginning.

"It's gonna be Amy," said one woman. The crowd around her enthusiastically agreed. Similar chatter could be heard throughout the crowd until the president began speaking right at five o'clock, with Justice Barrett standing alongside him.

Townhall's @ellie_bufkin is at the Harrisburg International Airport in Middleton, PA, where supporters of the president have gathered for tonight's rally.

They cheered as President @realDonaldTrump announced Juge Amy Coney Barrett as his nominee to the Supreme Court. pic.twitter.com/7Jt1ifYhQX

If anyone was disappointed by the president's selection, it was not apparent as they unanimously erupted in cheers when Trump named Justice Barrett as his third appointment to the Supreme Court.

The crowd chanted "USA! USA! USA!" as the president introduced Justice Barrett and her family, including seven children, to the United States of America.

Shortly after the announcement, the president departed the White House on Marine One, headed for Air Force One at Andrews Air Force Base. From there he will fly to Harrisburg to address the crowd waiting for him at the airport.

Trump just announced ACB and the crowd awaiting him in Pennsylvania is very happy pic.twitter.com/Gr8T8bJJje