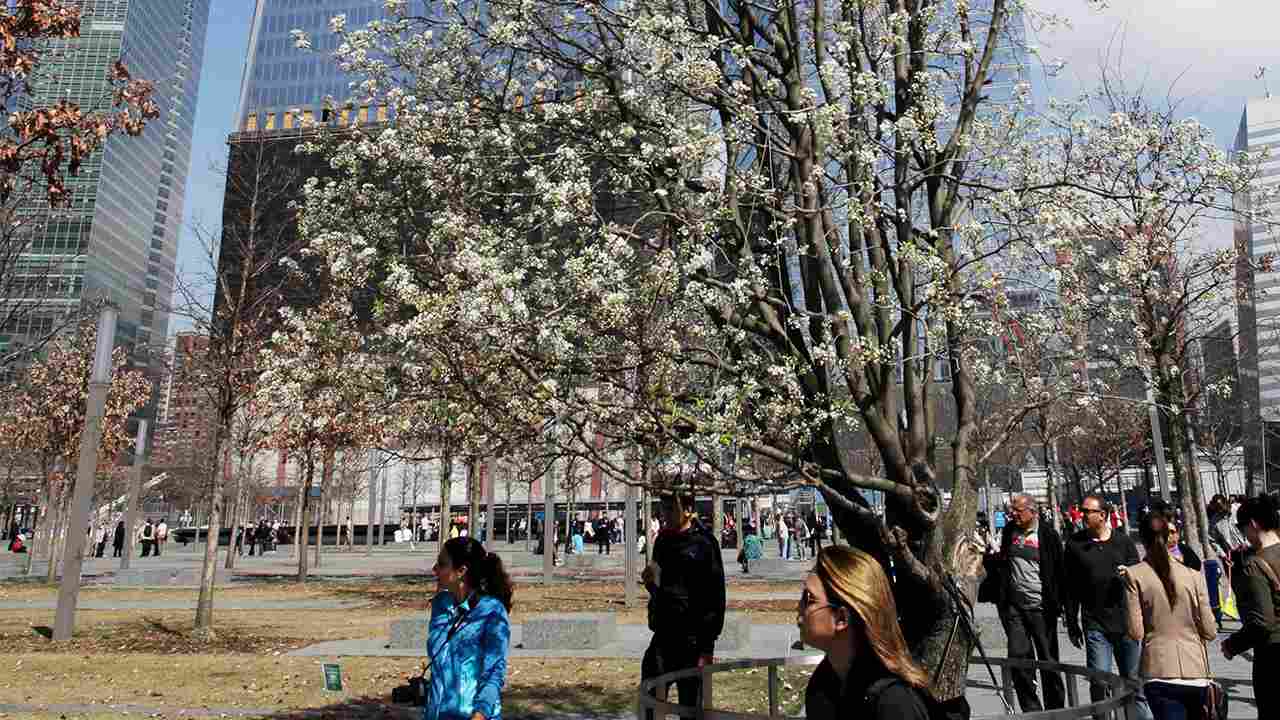 The horror of the terrorist attacks on September 11 at the World Trade Center in lower Manhattan was followed by days of fruitless search and rescue through the rubble at Ground Zero. Rescue workers sifted carefully through burning, unstable piles of twisted steel and concrete, calling out to each other when they heard anything, hoping their ears would be met with the sound of life.

Rescues of living people were rare; only a few survivors were pulled from the carnage. But after days of disappointment, death, and reeling from one of the darkest days in American History, rescue workers did find one sign of life. Out of the piles of wreckage, a fractured tree branch caught the attention of workers who quickly excavated the area and uncovered a Callery pear tree; it had been in a planter in the courtyard when the tons of two 110-story towers disintegrated on top of it.

The tree was damaged. When workers found it, the tree stood only eight feet tall, having had most of its upper branches either sheered or burned off in the destruction around it. But after days of fruitless attempts to find improbable survivors, rescue workers weren't willing to let the tree go. It was carefully removed from the area and transported to the care of the New York City Parks Department.

When the tree arrived at Arther Ross Nursery in The Bronx, it was in bad shape. Smashed and splintered, torn, and dying, the tree stood little chance of survival. But the employees of the nursery saw the trees survival as meaning so much more than just saving a pear tree.

For ten years, the tree was nourished and cared for at the nursery, pruned and shaped back to health, and as it became clear that the tree was a survivor, plans formed to have it returned to its original location downtown. The departure of the tree from The Bronx in 2010 was celebrated by all who had cared for her, but the moment was also bittersweet.

"I fell in love with her the second I saw her," Parks Department special projects manager Ronaldo Vega said. "She was a fighter."

He never gave up on her survival, he said from Ground Zero upon her return.

"We knew she was going to come back here."

In 2010, the tree was carefully loaded onto a flatbed truck to make the journey back downtown. Her branches showed the gnarled scars from the attack were then adjoined with fresh new branches showing years of nurturing and expert care.

Crowds of people cheered and cried as the truck pulled into Lower Manhattan.

The tree was planted in a six by six planter in the new courtyard that is now home to the Freedom Tower, the 9/11 Memorial & Museum, and the reflecting pools set inside the former footprints of the fallen towers. She isn't perfect, far from the symmetric beauty of other ornate trees in that part of the city. One side still struggles to grow branches. But she is healthy and thriving.

For the past seven years, seeds from the tree have been cultivated into saplings that are sent to be planted in other places devasted by terrorist attacks.

She blooms every April, without occasion, and without celebration. There is no marker to point out how special the tree is or how much it means to so many people. But she is there, through good and bad, and through times of sorrow and joy, as a reminder of American resilience in the face of impossible adversity.