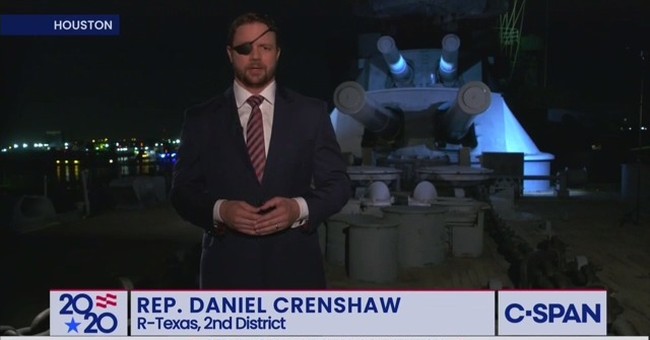 Texas Rep. Dan Crenshaw spoke with passion and soul in a speech from his hometown of Houston on the third night of the Republican National Convention.

The theme of the third night, "America: Land of Heroes," was perfectly met by Crenshaw, a former Navy SEAL who lost an eye in 2012 due to an IED explosion. He described the heroism of his friend Dave on that day in the Helmand province of Afganistan that saved Crenshaw's life. Dave lost his life in service of his country just two years later.

But the heroes Crenshaw wanted to talk about on Wednesday night weren't only those that bravely laid down their lives on the field of battle; the freshman congressman wanted to pay homage to the everyday heroes found everywhere in American life.

America is a nation full of heroes.

They deserve to be celebrated.

The American story deserves to be celebrated.

America is the greatest country on earth, and our future is bright.

That’s what my speech will be about. Be sure to tune in. https://t.co/eCtoorGIjn

"Here’s the truth about America: we are a country of heroes. I believe that, so should you," Crenshaw said. "We are a people with a common set of ideals conceived in liberty. A people that have sacrificed time and again — for our freedom, and the freedom of others."

This is unique to the United States, Crenshaw explained.

"These heroes acted as if the whole struggle depended on them alone as if any weakness on their part would be a reflection on the whole nation," Crenshaw continued. "That’s called duty, and America has a long history of it."

Crenshaw described the uncommon bravery by the United States military and the conviction of their purpose. A conviction that comes from the confidence that "Americans fight for good, and we know it." That heroism, Crenshaw said, wasn't limited just to the battlefield.

"It’s the nurse who volunteers for back to back shifts caring for COVID patients because she feels that’s her duty," he said. "It’s the parent who will re-learn algebra because there’s no way they’re letting their kid fall behind while schools are closed. It’s the cop that gets spit on one day and will save a child’s life the next."

"This is what heroism looks like. It's who we are – a nation of heroes, and we need you now more than ever. We need to remind ourselves what heroism really is," he said.

"Heroism is self-sacrifice, it's not moralizing and lecturing over others when they disagree."

"Heroism is grace, not perpetual outrage."

"Heroism is rebuilding our communities, not destroying them."

"Heroism is renewing faith in the symbols that unite us, not tearing them down."

Crenshaw said the stories of American courage and heroism created the nation that we live in today.

"The American spirit reflects the oldest and most important virtues: self-sacrifice, courage, tolerance, love of country, grace, and passion for human achievement," he said.