JetBlue Goes Full Tyrant, Ejects Family Because Toddler Could Not Wear a Mask 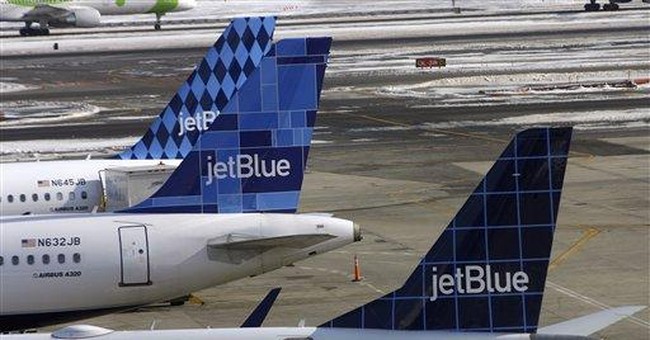 The airline best known for its vast travel destinations and low airfare made headlines on Thursday after they booted a mother and her six children from a flight.

JetBlue employees found themselves in a verbal standoff with the mother, Chaya Bruck, who was traveling alone with her six children this week when her two-year-old refused to wear a mask. On the flight from Orlando back to the family's home in Brooklyn, Bruck told a flight attendant her toddler child would absolutely not wear the mask.

"He said, ‘No, she has to cover her nose and her mouth,’ and I said I could try but then she was pulling it off,” Bruck said of the JetBlue employee. Her other five children were all wearing masks.

The flight attendant, however, insisted that the child wear a mask or they would all have to leave the aircraft. With tempers flaring and patience thinning, the mother said they would not get off the plane and that JetBlue's own policy, which she was familiar with, said that small children who would not wear a mask were exempt from the rule.

But to the flight attendant bent on enforcing the code of law he had been temporarily deputized with amid suffocating air travel restrictions, Bruck was the enemy, airline policy or not.

"They were horribly nasty, my kids were crying. Really traumatizing,” said Bruck. “I asked them, ‘Should I tie her hands and feet? What do you want me to do?’ They just wanted me off the plane."

When the mother, anxious to get home and still looking after six children, refused to deplane, another JetBlue employee ordered that everyone get off the plane. No one would be going while there was a rogue, maskless toddler on board.

At that point, other passengers became enraged at the inconvenience of having their travel disrupted because a small child would not wear a mask. Bruck said several passengers loudly voiced their defense of the young family, but it was to no avail.

In a video taken in the terminal after everyone left the airplane, the mother was shown arguing further with another JetBlue employee, quoting the airline's own policy to her.

"Small children who are not able to maintain a face covering are exempt from this requirement," the policy stated prior to Wednesday, as reported by YeshivaWorld and shared in their Instagram post.

JetBlue told the New York Post on Thursday that they had recently updated their policy to keep up with changing times and "updated most recently on August 10 to ensure everyone is wearing a face covering – adults and children alike – to help prevent the spread of coronavirus."

“Children age 2 and over must wear a face covering, consistent with CDC guidelines, which say ‘Masks should not be worn by children under the age of 2,'" JetBlue spokesman Derek Dombrowski said. Dombrowski excused the appalling behavior by the JetBlue staff who stranded Bruck and her children at a Florida airport by saying that Bruck had been emailed about the policy prior to boarding and check-in.

One mother of small children shared the shocking story with a request of the airline to clarify their arbitrary and baseless policy to mask toddlers.

In all seriousness I’d like a statement from the airline. Because I’m not going through this. I have a 1.5 year old and a 3 year old. The younger can’t wear a mask, and there needs to be some understanding with the 3-year old if it’s not perfect. @JetBlue doesn’t seem reasonable. pic.twitter.com/SINc9qqzGG

Bruck's husband has said he is seeking out a lawyer to represent the family in a lawsuit against the airline.