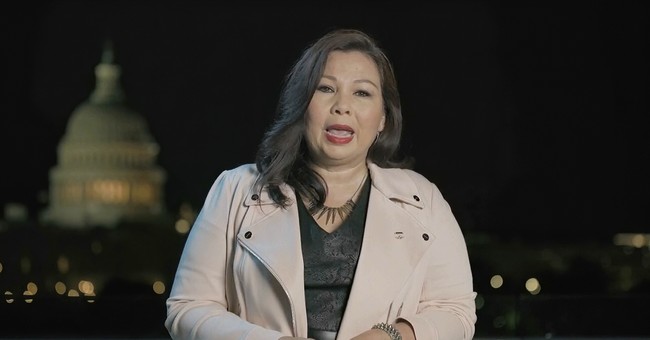 Speaking at the fourth night of the virtual Democratic Convention, Illinois Sen. Tammy Duckworth lauded presidential candidate Joe Biden for his character. She touted his experience as a father who has experienced the dread of having a son in the military, far away, and in potential peril.

"Joe knows the fear of military families," she said. This life experience, she asserted, made him uniquely qualified to be the best leader for America's troops. His empathy, she said, meant he would understand the needs of veterans and their families.

She went on to coo over Biden's grace and poise, then pivoted immediately into name-calling.

Donald Trump is the "Coward-in-Chief," Duckworth said. Seems grace from Biden is important but from herself, not so much.

Sen. Tammy Duckworth says President Trump is a "coward-in-chief, who won't stand up to Vladimir Putin [or] read his daily intelligence briefings"

"As president, Joe Biden would never let tyrants manipulate him like a puppet" https://t.co/GtFLIpIPzX pic.twitter.com/wFGBRXVHAV

"Somehow, Donald Trump still doesn’t get that America should stand up for what’s right — stand tall for our troops — and stand strong against our enemies,” she said. “But unlike Trump, Joe understands all of that."

Duckworth went on to say that Trump was not tough against world powers like Russian President Putin. But Biden, she reckoned, would be strong and fierce in the face of dictators. It's a bit of a stretch to assume Biden's fortitude against foreign powers, considering he often waxes poetic and even brags about how well he knows Chinese Communist Party Chairman Xi Xinping.

But actually, Biden's ole pal Xi and the rest of the Communist superpower that has been actively silencing their own people, shutting down pro-Democracy media, and even committing acts of genocide would love to see Biden in office. Specifically, they want to see Biden elected so they CAN manipulate him.

"Joe Biden is smoother to deal with than Donald Trump," Chinse state-sponsored newspaper the Global Times said on Thursday, celebrating the nomination of Biden by the Democratic Party. "This is the consensus of most countries around the world, including China, said experts, after Biden was officially declared the Democratic presidential candidate."

.@JoeBiden is smoother to deal with than @realDonaldTrump. This is the consensus of most countries around the world, including China, said experts, after Biden was officially declared the Democratic presidential candidate. https://t.co/OoL0rVL1tp pic.twitter.com/oTbQVqcRMu

Certainly, Joe and his supporters are leaning heavily on the fact that the man has "empathy." On the fourth night of the DNC, every single speech included a celebration of Joe's tremendous empathy. What they didn't do, was recount any tales from his nearly 50 years in political office of a time when he stood up to dictators or resisted foreign manipulation. The Chinese Communist Party has noticed.