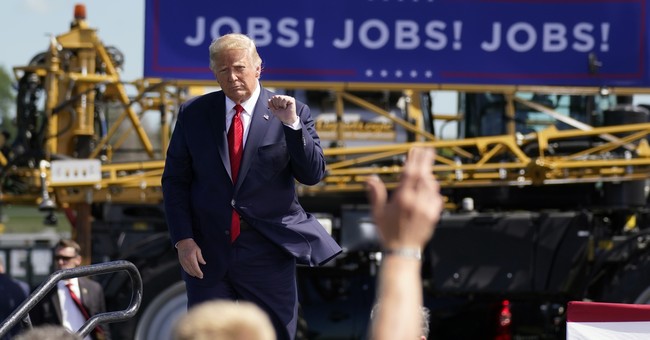 While August poll results about the possible outcome of the general election in November should always be viewed through a skeptical lens, it is impossible not to see the ground President Trump has gained on Joe Biden.

In recent weeks, several key polls have shown the president narrowing the gap between himself and the Democratic nominee, reflecting similar metrics to those seen in 2016. Since the start of the Democratic National Convention on Monday, the president's approval rating has spiked, as Katie reported.

One poll on Thursday stood out, showing the president in a tie with the former vice president. The poll, conducted by Trafalgar Group over a period of four days, showed both Biden and Trump with 47 percent support from those polled.

The same poll conducted by Trafalgar at the end of July showed Trump trailing Biden by 5 points. As the virtual DNC kicked off on Monday, August 17, it's interesting to note that polling was conducted by Trafalgar over the first and second day of their events. Many have criticized the convention for conveying a morose, infomercial tone, and failing to excite viewers about the possibility of a Biden presidency.

Although not shared during the primetime broadcast hours of the convention, the DNC has also come under sharp criticism for hosting an array of far-left radicals during their daytime programming. One panel featured Linda Sarsour, a Palestinian-American activist who vocally advocates for the destruction of Israel. Sarsour was even ejected from the progressive Women's March movement after being condemned as anti-Semitic.

Other panels featured activists calling for the abolishment of police and prisons, the end to the Pledge of Allegiance, and Sen. Elizabeth Warren hosting a panel on Native American rights.

Polling subjects in Minnestoa were not asked if their answers were impacted by the dramatic shift to the left by the DNC or the negative tone of the speakers.

President Trump visited Mankato, Minnesota last week and gave a rousing speech pledging to bring more jobs to the state and stop the country from being taken over by the "radical left." He lost Minnesota in 2016 by only 44,000 votes.

That speech was attended by at least 150 supporters, cheering wildly for the president and waving "Make America Great Again" flags while the DNC broadcast their festivities entirely online, with no live spectators. The lack of crowd interaction and support throughout the convention has been a sticking point with some voters.

Chief pollster for the Trafalgar Group Robert Cahaly said the results of his poll showed what he believed to be a "hidden Trump vote" that has been skewing other national polls in favor of Biden.

When asked, Robert Cahaly of Trafalgar Group said he sees a Hidden Trump Vote in his poll of Minnesota.

Cahaly was lauded in 2016 after being one of the only pollsters to correctly predict Trump's stunning victory.

Last week, Cahaly predicted a change in direction for the midwest and several key battleground states, saying that the highly unpopular decision of Big Ten football to cancel their season would be a major deciding factor for voters. The president has been outspoken in his belief that all college football should go forward with their season.

This is the single most impactful development in the #2020PresidentialElection today. Midwest #battleground state swing voters who see @SEC and/or @theACC play football this fall, will punish candidates who don’t constantly & loudly oppose #Big10 decision. https://t.co/TBhxlv3HMZ