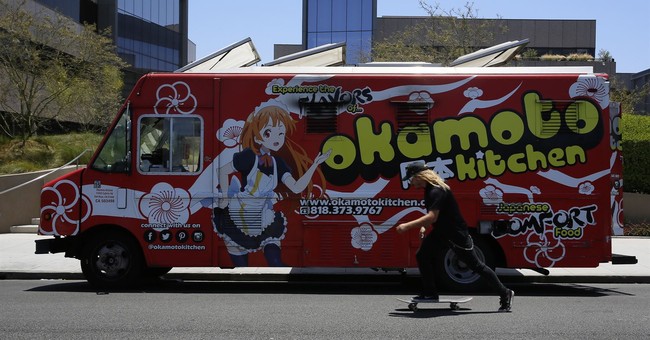 After years of a charming boom in popularity, Washington, D.C.'s popular boutique food truck industry is suffering the fatal consequences of the China coronavirus lockdown.

The fast-moving staff of Capitol Hill, the attorneys of Penn Quarter, and tourists from all over the world found common enthusiasm for the trucks, tracking the locations of their favorites and waiting in anticipation for the best quick nosh on their lunch breaks. Diners young and old, poor and rich followed trucks around the city from the sleek office buildings of Arlington, to the National Mall, to forest greenery of Cleveland Park.

Now, the trucks and their affordable meals of hot dogs, pho, and tacos are closing their sliding doors and leaving town. The COVID-19 shutdowns have essentially eliminated foot traffic in the district and all the trucks' customers with it. The chairman of DMV Food Trucks Association Zack Graybill told WTOP that nearly all trucks have been forced to leave the city or soon will be.

"In peak season, according to the Department of Health, there’s [sic] approximately 900 food trucks that come to D.C.,” said Graybill, who also owns fan-favored pizza trucks, D.C. Slices. “Now, 90% are not vending in D.C. anymore ... The suffering is severe,” said Graybill. "It's bleak."

Graybill pointed to the disappearing midday crowd that was populated by the thriving commuter presence in D.C. as the main cause of the industry wipeout. During healthy times with no shutdown, D.C.'s population notably increases nearly 80 percent to over 1 million. Now, as government workers, congressional staffers, and many other office employees have been relegated to working from home, that notable swell has vanished entirely. Permanent residents of the city have also fled for safer, roomier quarters with the telecommuting mandate.

"Our bread and butter was our lunchtime crowds," Graybill said. "Office workers, streaming out of their buildings, could easily get a meal from us. The majority of people are no longer working from their offices." Other restaurants in D.C. have also struggled tremendously to stay open with the lockdown orders, now in their fifth month. Most closed for more than a month only to partially reopen for to-go food only.

Various spikes in COVID-19 cases in the district have caused Democrat mayor Muriel Bowser to increase lockdown orders, including mandatory mask-wearing in all areas outside the home. The repeated lockdowns have caused restaurants in general to struggle, many unable to open at all since the beginning of lockdown.

Even with the more limited competition, food trucks have struggled more than other food service establishments to cater to a missing crowd of people. With more choices and far fewer customers, Graybill said, the competition was stiff. Many food truck operators facing permanent closure have turned to family and friends for financial assistance. But that money, like the money loaned through the CARES Act, will not last forever.

D.C. food trucks, it seems, are doomed. Without a permanent reopening plan for cities that begins imminently, many will face permanent closure.