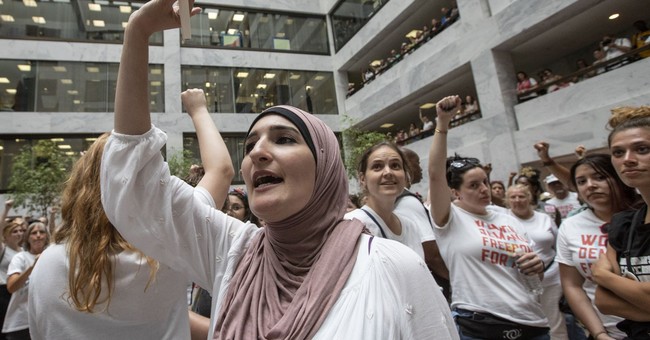 The call, referred to as the Million Muslim Votes Summit, took place virtually and featured progressive Muslim voices that have been supportive of Biden and other Democrats. Emgage Action describes themselves as a "membership based 501c(4) that seeks to mobilize American Muslims to advocate for issues that define who American Muslims are by what they stand for."

The group, in partnership with their sister non-profit Emgage Foundation, primarily work to increase visibility for Muslims running for public office. In the case of Biden, whom they officially endorsed in April, they conceded to endorse the white guy less likely to ban Muslims from entering the country. Their exuberance for Biden, however, has been lackluster since he overtook Socialist Bernie Sanders as the most likely Democratic candidate.

On the Monday call, Biden was joined by none other than Linda Sarsour, a far-left activist who became famous for co-founding the Women's March after Trump's election. Sarsour has since been removed from her board position of that organization after years of anti-Semitic sentiment made it impossible for her to reconcile her position of a "progressive" "intersectional" women's movement.

Sarsour's particular brand of anti-Semitism puts her pals Ilhan Omar and Rashida Tlaib to shame. A surrogate of Louis Farrakhan, Sarsour is outspokenly aggressive in her anti-Israel leaning, having publicly advocated several times for a one-state Palestine with no Israel. She is also pro-boycott, divestment, and sanctions against Israel, and has been tied to vehemently anti-Semitic zealots tied to terrorism.

Biden, however, gleefully joined the call with Emgage on Monday, happily following Sarsour, to take a moment to pander to Muslim American voters. What's a little association with a rabid anti-Semite when there's minority votes under consideration, right? Biden also used the opportunity to coin a brand new word on the call: "Islamicphobia."

"Under this administration, we’ve seen an unconscionable, an unconscionable rise in Islamicphobia and incidents including kids being bullied in schools and hate crimes in our communities," Biden said in his virtual speech. Before one had time to consider that perhaps he meant to say "Islamophobia," however, the former vice president used the incorrect word several more times, in his attempt to drag President Trump.

"He’s named people with a history of open Islamicphobia — open, straightforward, who have no business serving in high positions in our government — to key leadership roles in our Department of Defense and the US Agency of International Development," Biden said. He further vowed to "end the Muslim ban on day one, day one," of his supposed presidency.

Others noticed that in Biden's enthusiasm to pander to Muslim voters, he contradicted others supporters' belief that religion and education should stay separate.

For those trying to keep up with the Left:

Sarsour followed Biden's incoherent rambling with a far less than enthusiastic push for voters to fall in line with the 77-year-old candidate.

"This is not about who you like and who you don’t like, it’s about whether you want to defeat fascism in America,” she said. “This election for me is not about Joe Biden."

But for Biden, this is all about casting his net out into the ocean of progressive activists, hoping to net the biggest fish in the sea. To him, pulling back voices who advocate for destruction of Israel and sanction of Jews and Jewish businesses across the globe is fine as long as it comes with votes.

As instances of anti-Semitism rise in the United States, with unprecedented attacks on Jewish leaders in New York barely making the national news, Democrats have chosen to turn the other cheek. As the nation lurches to the left in matters pertaining to police, religious freedom, and the right to have dissenting thought in mainstream media, active hate against Jewish people has gone nearly unnoticed and entirely unpunished.

Biden's association with Sarsour should stir ire among his supporters in a time when liberals claim they want equality and opportunity for all. Instead, the political left has chosen to define their move for the White House with nothing more than a blind hatred of President Trump, taking whatever support they can get, even from the most bigoted voices in the nation. And Sarsour doesn't mean to go away from her alliance with Biden if he wins.

"Our community is committed to ending the occupation of the Palestinian people, our community is committed to Muslims who are oppressed all over the world,” Sarsour said during the Monday call. “We want to see Joe Biden in the White House but we also want Joe Biden to know that we will hold him accountable to our communities ... We will be at his doorstep to ensure that we are heard in this administration and we will fight for the things that we believe in and we are not going to end our work on election day."

Spencer Brown
How Dr. Fauci Hoarded Millions During the COVID Pandemic
Matt Vespa
Schlichter: America Should Be Our Priority