Progressive Yoga Studio Hoisted by Their Own Petard, Canceled for 'Performative Activism' 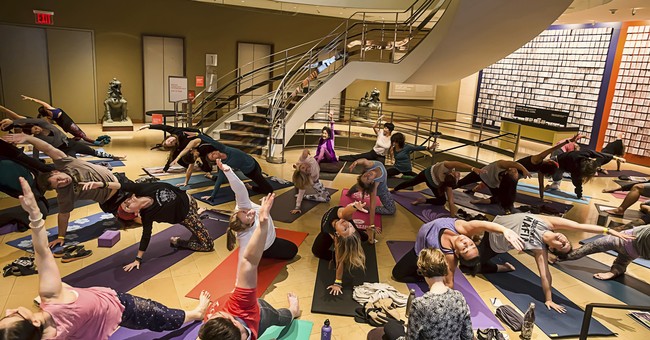 A Colorado yoga studio with multiple locations announced earlier this month that their plans to reopen following the COVID-19 pandemic have been canceled. The nine locations of Kindness Yoga in Denver were set to reopen their doors on Wednesday in accordance with local, phased guidelines for small business. Instead, owner Patrick Harrington is left with his 19-year business in ashes, wondering what went so wrong.

Already gutted financially by months of mandated closures due to the pandemic, Harrington was facing a challenging road ahead as he planned staggered relaunches of Kindness studios. Following the Memorial Day killing of George Floyd and subsequent protests over racial justice, however, things got a lot worse for Harrington and Kindness.

Harrington's business presented a noticeable progressive slant towards "social equality" even before the frenzied and incoherent calls for racial justice took to the streets this summer. Kindness was already offering a controversial class for "people of color" in which "white friends and allies” were asked to “respectfully refrain from attending.

The studios promoted inclusivity of all politically charged intersectional groups, touting gender-neutral bathrooms. They offered a donation based payment system that gave everyone access to the studio, regardless of their financial status, an effort the owners and fans of the studio praised as being a message of welcome to all communities.

Instead of taking concerns to Harrington and explaining how he was failing as an ally to activists demanding change, Turner and Smiley posted rants against Kindness on social media, where their large followings took their screeds to heart.

Among the discombobulated and irrational list of grievances, Turner claims that while Kindness posted messages of solidarity with Black Lives Matter on Instagram, their gesture was simply a show of "performative activism." When criticized for having too many white people represented on the company website, Turner said Kindness "cherry-picked" minority students and staff to be photographed for the site.

According to Smiley, Harrington and other Kindness leaders only "reacted to discomfort" when some teachers suggested that the studios' practice should be less focused on healing white people. Smiley also claimed that a harassment claim against a student was not followed up with by management and that as a transgender person, Smiley was asked to wear different clothes. Turner also criticized Harrington and Kindness for a lack of diversity on their board of directors, which, according to her, included only one non-white person.

In an Instagram post, Turner also lampooned a Kindness manager for crying when she was confronted with accusations of hand selecting minority faces for a photo shoot.

"The weaponizing of sadness and tears is infuriating,” Turner said. “It is one of the more insidious factors of white supremacy and whiteness. And it is used as a tool and as a tactic to make me feel in this Black body that I have done something inherently wrong to bring this sadness upon you."

If there were more serious accusations against Kindness Yoga and its owner and management than crying and attempting to pander to an unreasonable list of demands from an unstable social justice mob, it has not been made clear. Smiley's suggestion that a Yoga studio should selectively offer healing services to clients based on skin color sounds an awful lot like inviting them to participate in garden-variety discrimination, a business practice banned by the U.S. Constitution. But it seems that their failure to go against the constitution and against the United States has caused the destruction of their livelihood.

Smiley and Turner's posts included a call to action: email Harrington and complain about the "injustice," they "described" and then cancel your membership at Kindness. And, unfortunately for Harrington and reason and justice everywhere, people responded. More than 800 people reached out to Harrington, many asking to cancel their memberships. For a business already in the red and scrambling to survive during a pandemic, the cause of "social justice" dealt the final and fatal blow.

Both former instructors claimed their decision to blow up Kindness Yoga rather than talk reasonably with Harrington was justified. Turner said she attempted to go up the chain of command through other managers and Smiley said simply that such a conversation with Harrington "would be a danger to my mental health." Both instructors have announced they are starting their own Yoga practices, building a new institution directly atop the one they just torched. Much like what Black Lives Matter promises it will do to America.

The demise of Kindness Yoga stands as a shocking head-on-a-spike warning from the Black Lives Matter organization and movement. They are a cultural force with a powerful mob mentality and a radical list of ever-changing demands and non-static goal posts. If what Harrington offered as racial penance wasn't enough, what hope do normal business owners and citizens have? Launching an anti-racism podcast and hosting a yoga class that excluded "white friends and allies," seems to be in lock-step with the type of "justice" protesters are demanding.

But that's the point. Changing and submitting simply isn't enough, even for the most progressive, like-minded allies. Harrington's employees eagerly burned his business and didn't even wait for the ashes to clear before announcing their own. Kindness Yoga learned the hard way that there is no negotiation with radicalism. There is only total submission.

I Know Exactly Who Is To Blame for This New Wave of COVID-19, and I Know Who Is Making a Fortune on It
Townhall
'LMAO, who are you?!' Alex Vindman begs for help 'getting the word out' on his book no one cares about and HOLY MOLY that's a lotta backfire
Twitchy
'Science' Burns Its Credibility to the Ground and Vindicates Republicans Along the Way
Redstate
A Day in the Life of a Low-Information Voter
PJ Media