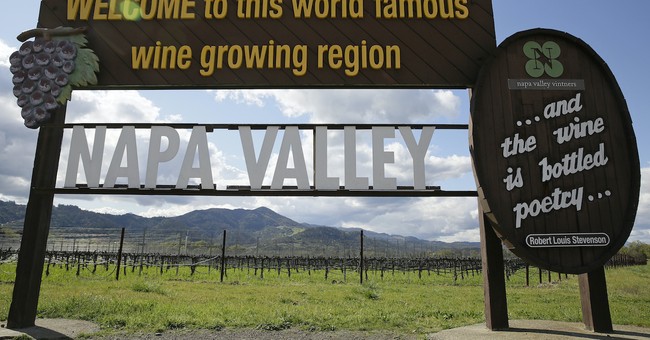 Winemakers in the famed Napa Valley, the heart of American agricultural tourism, were flummoxed by the initial reopening plan for the state of California that seemed to leave them high and dry. Governor Gavin Newsom revealed his plan last week to ease the state into early stage reopening, but wineries in Napa faced a major hurdle hidden in the fine print.

California businesses have dealt with some of the strictest shut down regulations since the onset of the Wuhan coronavirus pandemic, including closures of public areas, legally required masks for people outdoors, and staggering shutdowns of "nonessential" services. As millions of Californians filed for unemployment and businesses clamored to get any assistance they could from the government, Gov. Newsom prolonged shutdowns even as other states pushed to reopen.

In Napa Valley, wineries thought they were finally getting a chance to reopen their tasting rooms after a devastating start to the season, but the stage two plan from the Governor's office had a nasty surprise in store. Restaurants and wineries in Napa County were permitted to open with limited capacity, the governor said, but only if they served full sit-down meals in addition to snacks and alcohol. In a true Catch-22, however, Napa County laws specifically prevent wineries from doubling as restaurants and serving full meals as described in the governor's order.

Caymus Vineyards, which has been in operation since 1972 and serves some of the most prized wines of the region, felt particularly discriminated against by the governor's orders that left out their business and most Napa wineries. Vice President and General Counsel for Caymus Michael Carlson said the requirement to serve full meals was "unconstitutional."

The recent orders provide no explanation for the disparate and unfair treatment between wineries that serve food and those that do not. The double standard of allowing restaurants and wineries that serve food to reopen while prohibiting wineries from conducting wine tastings alone is both unconscionable and unconstitutional. Napa County is allowing wineries to expand their outdoor tasting space to accommodate social distancing. The state’s guidance is not just inconsistent with that allowance, but a damaging impediment.

Caymus took their complaint to the U.S. District Court for the Northern District of California, suing the governor and California State Public Health officials for alleging discrimination in the state’s second stage reopening plan. Caymus claimed the plan was in direct violation of the Equal Protection, Due Process, and Takings Clauses of both the U.S. and California Constitutions.

That lawsuit, filed at the end of May, petitioned the court to allow Caymus and all wineries in Napa County to reopen for tastings as the entire country had satisfied the state criteria to enter phase two.

Gov. Newsom is also not an entirely uninterested party. As an entrepreneur, he co-founded the PlumpJack Group in San Francisco in 2003 with noted California oil billionaire Gordon Getty. In addition to hotels, wine merchants, retailers, and several full service restaurants, PlumJack also operates several high end wineries in the Napa Valley. But the founder and President of Caymus, Chuck Wagner, just wanted to be treated fairly.

"If it’s safe for restaurants and other wineries to serve meals, it’s undeniably safe for wineries to open for tastings," Wagner said. "Our lawsuit makes a simple demand – that we be treated fairly and equally. We take public health laws seriously, and we’re not asking for special treatment."

Just days after the court filing, Newsom amended the ruling that required full service meals from wineries and permitted the majority of Napa Valley winemakers to reopen their tasting rooms beginning June 12. Wineries in Sonoma, which met the same criteria for stage two at the same time as Napa, have been operating since May 19.

Newsom's shortsighted initial order that left Napa County at the mercy of strict local regulations, highlights potential problems that could be seen all over the country as different businesses are permitted to open at different times. Even with help from programs like the CARES Act, small businesses, particularly in the hospitality industry, are nervous about what they can do in the future to help ease the losses they've experienced throughout the pandemic. Still, the opening of Napa Valley couldn't come a minute too soon.

"The impact of the COVID-19 crisis has been devastating for all businesses, and especially for small businesses which make up the vast majority of wineries in Napa Valley," president & CEO of Napa Valley Vintners Linda Reiff said. "The opening of tasting rooms will provide much-needed jobs for families and our community."