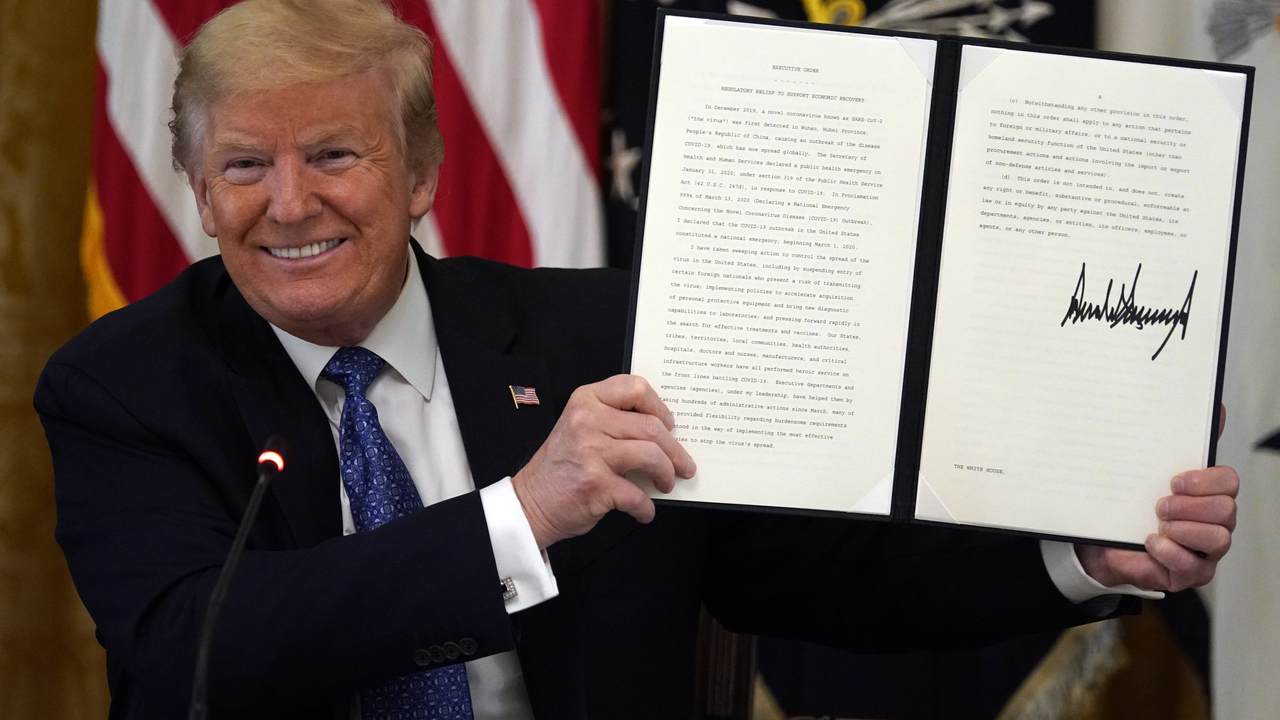 President Trump continued the regulation-butchering trend he created at the start of the Wuhan coronavirus pandemic by signing a new executive order on Tuesday, clearing the way for job growth as states ease up suffocating lockdowns. The new order specifically directs federal agencies to identify any current regulations that could be halted in order to clear the way for exponential job growth.

The second directive in the order, however, paves the way for an era of liberty in the United States, which has been encroached upon for years by burgeoning government meddling in American life. In the order signed on Tuesday, President Trump directs every government agency to review nearly 600 state and federal regulations that were suspended amid that national state of emergency and determine which ones can be deep-sixed forever.

"In a time of crisis, regulations shouldn't stand in the way of patient care," Centers for Medicare and Medicaid Services Administrator Seema Verma said at the end of March. She's absolutely right. But when there is no crisis and America is back on its feet in the near future, why should regulations return to standing in the way of medical care?

Verma will oversee the CMS as it reviews hundreds of such regulations in the coming days to determine which are helpful to Americans and which are bureaucratic red tape that harm the very people they were intended to help. Some regulations Verma will look at prevented patients from accessing telehealth, prevented doctors from caring for patients and limited the type of medical care qualified, trained nurses could give, simply because they didn't have the correct paperwork.

While the CMS has its work cut out for it, other federal and state agencies will review hundreds of other lifted restrictions that were cut to make lives easier for Americans. In addition to regulations meant to make health care more affordable and accessible for vulnerable populations and those without substantial means, temporarily restricted regulations from the Centers for Disease Control and Prevention (CDC) and the Food and Drug Administration (FDA) are also on the chopping block. Allowances from the FDA and the CDC paved the way for unprecedented domestic manufacturing of personal protective equipment and testing at a time when the country greatly needed them. To replace such regulations during a normal time in the nation would be significantly counterintuitive.

Under suspended regulations from other agencies, businesses were able to expand their function to accommodate the needs of those in crisis. Distilleries, for example, were allowed to manufacture hand sanitizer and automakers were permitted to make much-needed ventilators. There would be no need and no reason to prevent American industry from being able to continue to diversify its production and bolster the portfolio of domestic products in the future.

A spokesperson for the White House noted the unprecedented move on President Trump's part to move forward with removing regulations in the wake of a crisis, not add them.

"[This] is the first time in living memory that a president has responded to a national crisis by deregulating instead of grabbing more power," the White House spokesperson said of Trump's executive order this week. And in this time of uncertainty, with many states and regions still on strict lockdown orders by governors and local officials, the president's move to repeal orders instead of add to them is a much-needed sigh of relief for the American people.

In a time when the United States economy seems to be idling under lockdown orders while nearly 40 million people have lost their jobs and 100,000 have lost their lives, repealing needless regulations is an obvious step toward recovery and restoration of normal life.

The president reminded the nation on Friday that they have the right under the First Amendment to gather at their house of worship, no matter if there is a pandemic or not. Likewise, shedding government regulations for good gives Americans their right to move on from this nightmare and once again live freely in the United States.