If Regulations Impede Necessities in a Crisis, They Should Be Abolished Forever 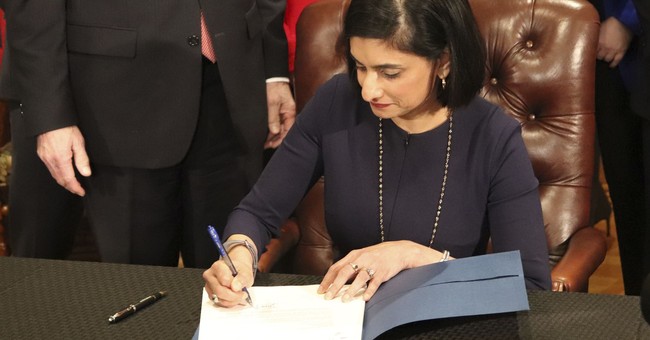 A report released earlier this week described 117 federal and local regulations that had to be bypassed or ignored in order to get medical help and necessities to Americans affected by the Wuhan Coronavirus. On Monday, even more regulations were rolled back by the Centers for Medicare and Medicaid Services in the name of relieving bureaucratic headaches and allowing medical staff to treat patients.

"As the President has said, we are engaged in a war against an invisible enemy," proclaimed CMS administrator Seema Verma from the Rose Garden. "In wartime, the assumptions of peacetime must be revisited and adjusted to meet the demands of the moment. And so, under the President’s leadership, CMS is waiving a wide and unprecedented range of regulatory requirements."

The "wide and unprecedented range of regulatory requirements" being bypassed to allow people to receive medical care included allowing ambulatory surgical centers to provide hospital care, permitting non-hospital buildings and spaces to be converted into medical and quarantine sites, allowing COVID-19 testing in homes and other non-medical sites, and allowing hospitals to provide food and childcare to their staff.

Altogether, the list of waived regulations from the CMS brought the total number of lifted blockades from 117 to 147, according to data compiled by the nonprofit Americans for Tax Reform. All of this was done in the name of providing critical care. And as Ms. Verma touted the measures being taken by the CMS to alleviate challenges that strict regulatory requirements generally inflict, the question becomes: Why did we need such regulations at all?

The CMS, which is under the umbrella of the Department of Health and Human Services, has existed to some extent since the beginning of Medicare and Medicaid programs in 1965. It currently operates branches across the country and employees over 6,000 people while controlling a $3 trillion budget.

The agency describes their mission as one of providing healthcare to Americans who need it, but as Seema Verma made clear on Monday, their multi-trillion-dollar function is to largely control how that healthcare is provided. Regulatory requirements implemented by CMS go way beyond clearing the way for Americans to get the treatment they need, stymying medical professionals in both the private sector and public service.

Likewise, the Food and Drug Administration has repealed a multitude of rules that slowed production of pharmaceutical therapies and disease testing kits that would have most certainly caused more deaths if their blockades remained in place. The FDA had to clear several restrictions to pave the way for private companies to produce personal protective equipment for medical staff. Rules preventing patients from receiving lifesaving care and throttling production of masks and ventilators seem counterintuitive even in the best of times.

In the time of pandemic, the nation seems to be clear eyed about the superfluous nature of nearly 150 regulations at the federal and local level. Restrictions on alcohol delivery, parking enforcement, telemedicine, and even the size of hand sanitizer bottles allowed on flights have also been lifted, all in the name of crisis. But if these regulations don't apply to a nation engulfed in such a serious ordeal, who were they meant to protect?

Government figureheads have been congratulating themselves to the American people for weeks from the White House, touting the number of regulations they waived in the name of helping those in need. But if your taxpayer-funded programs' greatest achievements in a time of crisis are to ease up on enforcing rules, perhaps there shouldn't be so many rules. Bureaucratic blockades inappropriate for national disaster shouldn't be in place in times of health and peace either.