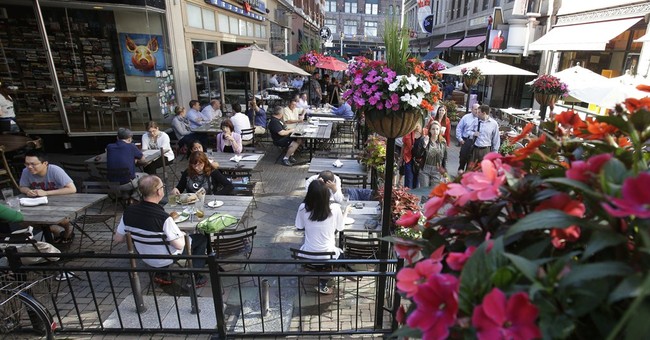 The Wuhan coronavirus kicked the legs out from under many businesses in the United States, but perhaps no industry was more devastated than bars and restaurants. As dining rooms closed and barstools sat empty amid the declarations of a national emergency and a global pandemic, chefs, bartenders, servers, hosts, managers, vendors, drivers, and countless other workers were forced to depend on government unemployment benefits. But temporary government reprieves expire, and the restaurant workforce, like every other industry, needs to get back to work as soon as possible.

As the curve has flattened and new cases of COVID-19 infection drop across the US, restaurants continue to suffer because of tight restrictions imposed by state governors. As the calendar flipped to May, however, many states saw restaurants that had closed their doors or kept to take-out and delivery only for the past two months welcome back dine-in patrons thanks to eased restrictions. But limits on allowed capacity and enforced social distancing prevent most restaurants from being able to afford to open their doors.

"We have the same costs to open at limited capacity and, truthfully, I don't think the income would be worth it," one Brooklyn restauranteur told The New York Post. "I am not going to open the inside of my restaurant at a 25 or 35 percent capacity."

But there could be a solution if state leaders are willing to relax other regulations in favor of those mandated by the threat of disease. In Virginia, Governor Ralph Northam is allowing restaurants in most counties to open their outdoor dining areas to a maximum of 50 percent capacity as part of his phased reopening plan for the state. Under normal circumstances, this is not enough space to allow a restaurant to earn what they would need to justify operating expenses, but if the dining room size expanded, say, into the street and on the sidewalk, it could just work.

Social distancing regulations, which many governors have indicated as long-lasting effects of the pandemic, loom as a troubling implication for restaurants that operate on typically razor-thin margins. Restaurants already in dire straits need to have a robust reopening to survive the coming months and even years of possible regulations. The most beneficial solutions for restaurants will require creativity and extreme flexibility from local governments.

Currently, most states have strict limits on where outdoor patios can be set up, when they can operate, what can be served, and how many people they can accommodate. Suspension of these arbitrary rules could swing open a significant door of hope for restaurants faced with financial destruction.

With nice weather expected during the phased reopening, restauranteurs with half-empty patios should consider taking their capacity problems to the street, literally. Nearly empty downtown streets provide a blank canvass of socially distanced opportunity with the cooperation of local government.

As recommended telecommuting continues and traffic remains far lighter than in the time before the pandemic, city street closures and blockades could create acres of outdoor dining space that was not previously allowable. Downtown streets could convert into semi-permanent, socially distanced street festivals.

The salvation of limited outdoor dining patios could very well be the creation of temporary town squares and beer gardens. In fact, one Lithuanian city has already tried this tactic with overwhelmingly positive responses from restaurant owners and patrons. The mayor of Vilnius envisioned a "big open air café" in the middle of his city to allow for social distancing, and that's exactly what he did.

More than 200 cash-starved businesses in Vilnius expressed interest in the idea of the open air café and patrons clamored to fill the seats and sip wine, even as the weather in the Northern European nation refused to cooperate. Restauranteurs were even given access to local parks, where they were able to properly space out tables and chairs to adhere to the country's social distancing regulation. Lithuania currently only allows two people per table in the early phasing of reopening, but one restaurant owner, Eimantas Lumpickas, said the park setting and newly allowed sidewalk seating would be enough to survive.

In the United States, more than 13 million people work in bars and restaurants, making it one of the largest industries in the nation. Many restaurants have already determined that they will not be able to reopen even if they could fill their dining rooms tomorrow. Every other restaurant, even large chains with corporate investors, are facing extreme hardships and permanent layoffs as they contemplate their futures.

Annexing city streets and overtaking sidewalks is far from a perfect solution, but the devastation of the Wuhan virus offers no American the ideal answer or an obvious road to recovery. As the weather warms and the sun shines, many people are ready to fill the seats and tables of their favorite restaurants again, even if that table isn't where they expected to find it.