'We Have to Get Back to Work': Restaurant Owner Opens for Business Amid Stay-at-Home Order 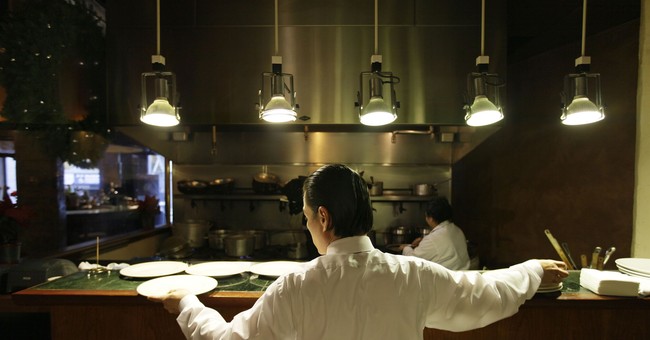 Although some state leaders are slowly rolling back stay-at-home orders and bans on "non-essential" activity, some business owners have chosen to open their doors without government approval and take their chances with the long arm of the law.

One restaurant in Houston, Texas could no longer watch their business dissolve due to a halted economy that's costing their employees' livelihoods. Speaking to CNN on Monday, Matt Brice, owner of Federal American Grill, said he could no longer stomach watching his worker's lives destroyed as the doors to his business remained closed. But asked whether he felt his action was an expression of 'defiance,' Brice said it was simply what needed to be done.

"This is not to defy. Everybody’s using this word ‘defy,'" he said. "I’m a businessperson, and I have a lot of employees that are hurting at the moment, a lot. You can see the economy just absolutely crashed. The first two weeks when we were told to basically 'hunker down,' as we say here, everybody did and we have all the way through six weeks." Brice said he followed the Texas orders for shut down as long as he could and abided by all the criteria elected officials outlined as most important.

A Houston restaurant owner says he reopened despite a stay-at-home order “not to be rebellious” but “because people don’t have an out.”
“Paychecks stopped. There’s a lot of nice programs out there with a stimulus check that helped but for how long... is that going to go for?” pic.twitter.com/b3A6cS7cRj

"We wanted to make sure that the medical employees weren’t inundated with hospital beds and whatnot, so we were doing our part there to make sure that they were all safe until we felt that it was safe to open and when I say our employees are in bad shape, you know, I could tell you story after story. It was my duty to get us open."

Of the threat of six months of jail time for ignoring the order, Brice said he had his priorities straight, considering the number of people under his watch that was ravaged by the collapsed economy.

"We’ve complied 100 percent until now,” Brice told the Houston Chronicle. “What I don’t like is that the government is picking and choosing which businesses win or lose. They are sinking the economy. We have to stand our ground and get people back to work."

"it wasn’t to be rebellious or anything, it was really because people don’t have an out," Brice continued. "These guys have to get a paycheck. Paychecks stopped. There’s a lot of nice programs out there with a stimulus check, that helped, but for how long? ... You know, so at some point, we have to get back to work."

Brice also instituted several new restaurant policies to assure the safety of his staff and customers. Calling his weekend opening a "pilot program" of sorts for other local restaurants, Brice said many changes allowed them to be open with the safety of patrons and workers at the forefront of his mind.

Disposable menus, masks, and gloves for all employees, and a bathroom attendant ensuring proper social distancing were all measures taken by Brice and his team to get the restaurant open safely. He also removed chairs from the bar to make sure six feet were observed between patrons and used a color-coded linen system to make sure no guests were sat at tables within six feet of each other.

Most importantly, Brice said, hands-free payment options were introduced to diners, including the option to use Venmo or PayPal to settle tabs without ever touching a check. This system, he said, was already being used by customers taking food-to-go and was an easy transition for dine-in guests.

Brice also said the support of local residents and the Mayor of the Houston area town of Memorial, where the restaurant is located. He was grateful for the support of the customers he had over the weekend but said his actions were much bigger than just his own restaurant.

"I’ve received tons of support from local restaurants and national restaurateurs,” Brice said. “But this is not about Federal American Grill. It never has been. I am doing this for all the small businesses."