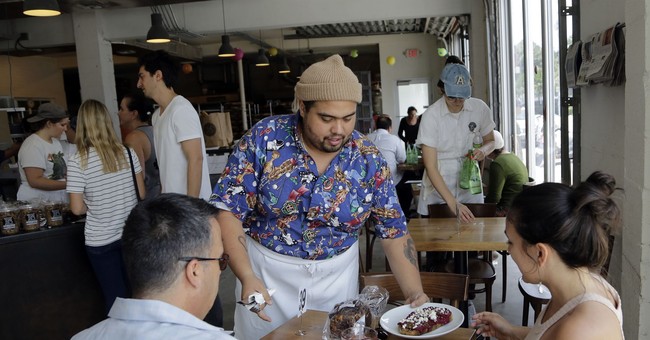 Small business owners in the United States are now facing an unexpected hurdle as they attempt to stay solvent through the Wuhan coronavirus pandemic. After the arduous process of applying for emergency funding through the Payroll Protection Program, some employers are finding that their workers are not pleased that normal payroll can resume.

Because of the increased unemployment benefits stipulated in the $2.2 trillion CARES Act, many Americans who work for small business are finding that they can earn more money by staying home than by receiving their regular paychecks. Though unemployment benefits vary by state, with the supplemental $600 per work UI payout, a large portion of furloughed and laid off workers are finding themselves in a financial windfall by being out of work.

Unfortunately for those workers, however, once their employer offers to pay them again via forgivable PPP loans, they lose their right to collect unemployment money from the government. One small business owner found that her staff was particularly distraught when they learned they could go back to receiving their normal pay.

"It was a firestorm of hatred about the situation," Washington State business owner Jamie Black-Lewis told CNBC. She had to suspend pay to 35 employees after the Wuhan coronavirus forced her two spas to close their doors last month. After applying for financial aid for both locations, she was thrilled to receive more than $200,000 in forgivable loans. Sharing the news with her laid off staff however, didn't go over the way she anticipated.

"I couldn’t believe it,” Black-Lewis said when her employees told her she was essentially taking away their ability to earn extra money. “On what planet am I competing with unemployment?" Just under $600 billion in forgivable loan funding has been approved by Congress in the CARES Act and a supplemental bill passed this week.

Nearly 30 million Americans have filed for unemployment since pandemic-caused layoffs began and many who have filed for unemployment have found themselves in a cozy financial situation, courtesy of the taxpayers. Under normal circumstances, unemployment coverage only supplements a national average of about 40 percent of a person's lost income. But with the CARES Act federal addition of $600 per week (valid through July), employees that earn up to $62,000 per year in Washington State can earn more money by being laid off than by earning their normal check. In California, where the median individual income is just over $35,000 per year, employees who earned up to $54,000 can make more from unemployment under the current guidelines.

Although employees cannot continue to receive unemployment benefits after their paychecks become available again, whether or not business owners can replace them is more vague. According to the United States Treasury Department, employers wishing to have their PPP loan totally forgiven may not reduce salaries and must maintain the same worker headcount. But rules about whether employees cannot be replaced are less clear. Those who wish to remain out of work may, seemingly, be permitted to do so. Their beloved unemployment money, however, will not be available.

How much of my loan will be forgiven? You will owe money when your loan is due if you use the loan amount for anything other than payroll costs, mortgage interest, rent, and utilities payments over the 8 weeks after getting the loan. Due to likely high subscription, it is anticipated that not more than 25% of the forgiven amount may be for non-payroll costs. You will also owe money if you do not maintain your staff and payroll.

· Number of Staff: Your loan forgiveness will be reduced if you decrease your full-time employee headcount.

· Level of Payroll: Your loan forgiveness will also be reduced if you decrease salaries and wages by more than 25% for any employee that made less than $100,000 annualized in 2019.

The $600 federal unemployment supplement ends in July and most states terminate unemployment benefits before six months have elapsed. It would behoove workers, then, to resume their pre-pandemic salaries as soon as possible. Some politicians, however, have called for American workers to refuse to return to work even after the risk of the Wuhan virus has passed for reasons completely unrelated to viral pandemic.

"When we, you know, have this discussion about going back or reopening, I think a lot of people should just say, 'No. We're not going back to that,'" New York socialist Alexandria Ocasio-Cortez said on Tuesday. "We're not going back to working 70 hour weeks just so that we can put food on the table and not even feel any semblance of security in our lives."

The pandemic caused the end to a decade of job growth in the United States, which included record low rates of unemployment for minorities.