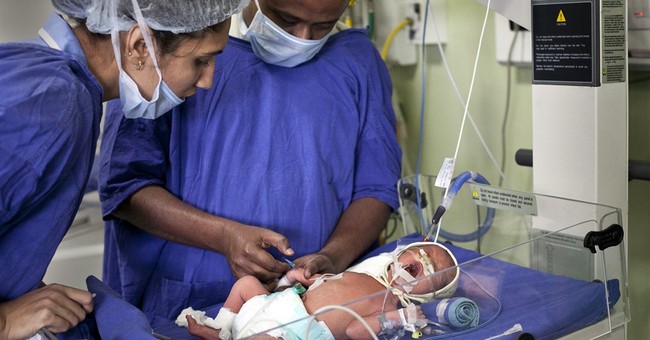 The Carilion Clinic in Roanoke, Virginia announced this week that the Neonatal Intensive Care Unit would be closed to all visitors including parents until further notice. The closure will prevent parents of vulnerable newborns who need further medical care before leaving the hospital from seeing their children until the NICU is deemed safe by the clinic administration.

Under normal circumstances, children in the NICU, who are often born premature or with serious medical issues, spend their days with hospital staff and their parents who are required to go through many sanitation and health protocols before contacting their infants. In most cases, parents are encouraged to spend as much time as possible with their new babies in the NICU to bond and prepare to take the children home.

"This was a very difficult decision for us to make," said Carilion Children's Hospital Chair Dr. Kimberly Dunsmore. "We know how important it is for families to bond with their newborn infants." The hospital has also said they are setting up a video streaming system to allow parents to interact with their children's health care providers and prepare for the day when their new babies will come home.

"We are working to help parents maintain their connections with their children through video technology and to provide training for parents when their children are near discharge," the closure announcement shared on the Carilion's website.

There was just one exception offered to the parental visitation ban: those with infants that were unlikely to survive the length of the shutdown.

"In addition, exceptions will be made for children who are near death," according to the statement. "This was a difficult decision to make, and we will welcome families back to the NICU as soon as the situation is safe for parents, their children and our caregivers."

One mother of a recent graduate of another NICU told Townhall that she would be devastated if told that she and her husband would not be able to see their daughter.

A study published by the National Institute of Health concluded that closeness between parents and infants in the NICU was vital to bonding in the earliest days of a child's life.

"Culturally sensitive care practices, procedures and the physical environment need to be considered to facilitate parent–infant closeness, such as through early and prolonged skin-to-skin contact, family-cenetred care, increased visiting hours, family rooms and optimization of the space on the units," the study said.

The ban of parent visitations at Carilion follows other troubling rules being enforced by state governments and local authorities across the country as the COVID-19 infection roars on. In Colorado, a man was arrested for playing softball with his young daughter in an empty park. The police department involved later issued an apology to the man saying that there had been a "clear overreach" by law enforcement.