What Could a COVID-19 Antibody Test Mean for Americans? 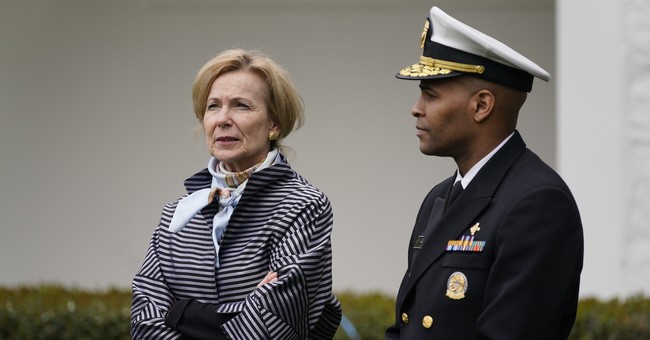 While many Americans are anxious to take a medical test that can show whether they have been infected by the Wuhan Coronavirus, another test is being produced that could help get people back to work.

As medical experts and political leaders advise the country not to be tested for the virus unless they have symptoms, it is expected that some Americans, particularly healthcare workers, will contract the virus but never know it for sure. A test for the presence of antibodies in the system, however, could show that someone has had the illness and recovered, likely making them immune from getting it again.

According to Dr. Deborah Birx, the response coordinator for the White House Coronavirus Task Force, a test that could detect antibodies in a person who has recovered from the Wuhan virus is on the way.

Finding out who has already had the virus but recovered could be a game-changer as the pandemic has frozen the economy and put healthcare workers in danger as they treat infected patients. As experts have noted from the beginning, the manifestation of the illness can range in severity from hardly noticeable to permanent lung damage and, of course, death. Those on the less severe end of the spectrum could feasibly have been exposed and defeated the virus with a strong immune system and the creation of disease killing antibodies.

Once a person can be proven to be a non-host for the illness with a reinforced immune system, they could hypothetically return to work without the fear of catching the Wuhan virus and not being able to spread it to others. But as Dr. Birx pointed out from the Rose Garden on Tuesday, this theory isn’t entirely sound.

New York Governor Andrew Cuomo suggested earlier in the day on Tuesday that his state, which currently has by far the most confirmed cases of the disease, would send people back to work and reopen the economy if residents could prove the existence of antibodies in their system. From the White House, however, Dr. Birx warned that antibodies can be weak or vigorous depending on the person who has them and cannot prove beyond a shadow of a doubt that a person cannot contract COVID-19 a second time.

Research being done on the potential of testing people for the presence of Wuhan Coronavirus antibodies has shown promise, though no confirmation of future immunity to the virus currently exists.

Dr. Florian Krammer and his team of doctors, scientists, and graduate students are in the late stages of developing a “serological test,” which could determine whether a person has already had the virus. Dr. Krammer, a professor of microbiology at Mt. Sinai in New York, has been working with his team at a private lab at the Icahn School of Medicine, part of the Mount Sinai Health System.

“It has a lot of uses in research, Dr. Krammer said during a question and answer session with Contagion Live on Tuesday. “We can use it to better understand the antibody response and dynamics. We can now perform serosurveys to figure out how widespread the virus actually is. People who might not have symptoms might still produce an immune response. Those are the research reasons for doing this.”

Dr. Krammer went on to describe that people who have “seroconverted,” or recovered from COVID-19, could qualify as plasma donors that could aid in medical therapy from those suffering from the virus. He noted that China and Italy have explored this option and both nations are currently conducting clinical trials.

Expressing optimism at the notion of sending people back to work with proper testing, Dr. Krammer explained how the process could work and what people could expect.

"The other more hypothetical use is that we don't know what the real infection rate in the population is. We know from human coronaviruses that—for at least some time, as long as the immune response is there—once you seroconvert you are immune to reinfection. It doesn't last forever. It lasts maybe for 1, 2, maybe 3 years. But you get a protective immune response for some time.

Everybody's at home, self-quarantining. If you would know who was already exposed and infected and who has an immune response, we might be able to let these people go back to work. Because if they're immune, and they can't get infected anymore, they're no danger for others because they're not able to spread the virus on anymore. That is more hypothetical. There's no approved use of that assay for that purpose right now. But that's something that we may want to think about when we think about restarting the economy.

A lot of health care workers also probably got exposed early in the game, and they might now be immune. Knowing that you're immune might be some comfort if you have to deal with COVID-19 patients.”

While one to three years isn’t forever, it certainly could be enough to flatten the curve and get healthcare workers back into the field. Without the fear of contagion, the country could get back to normal much faster than some have estimated. And as Dr. Birx and Dr, Krammer confirmed, efforts to get this testing into the marketplace are well underway.