No, Electric Cars Will Not 'Save the Planet' From Climate Change 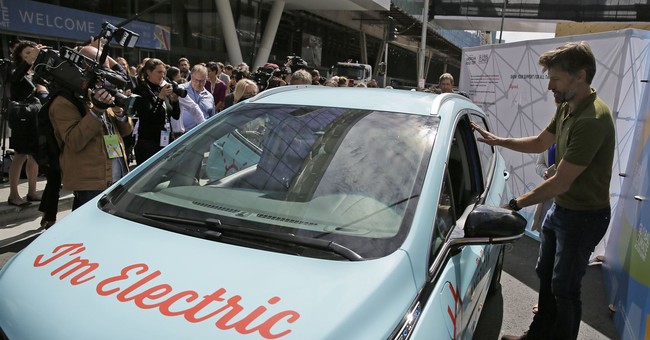 After Joe Biden and Bernie Sanders vowed to end all fossil fuel use during the Sunday night Democratic debate, the reality of an all electric lifestyle must be considered.

The idea of eliminating fossil fuel use in the U.S. is obviously an effort aimed at reducing emissions and green house gasses considered harmful to the environment and propelling the effects of climate change. But are battery-operated vehicles a truly green, clean alternative to traditional fuel operated vehicles?

There is a lot of incomplete information about electric vehicles that is commonly accepted by environmentalists as fact and touted as a badge of sacrifice on the alter of climate activism. The truth, however inconvenient, is that battery operated vehicles aren't so clean and offer their own set of resource-depleting problems.

Do Electric Vehicles really give off zero emissions?

While Electric Vehicles (EVs) do not emit CO2 like traditional combustion engine cars, they actually do still have particulate emissions which pose a substantial threat to clean air. Batteries required to power cars with no assistance from a traditional engine are quite heavy and place a much larger burden on tires than traditional cars. As the EVs rack up miles, particulates from tires, break dust, and re-agitated roadway pollutants are all mixed into the environment, creating potentially harmful air quality. As the increased workload on braking systems of EVs became a known problem, however, some electric cars have developed regenerative braking systems to curb the increase of air pollutants.

Where does all that recharging power come from?

While there are public charging stations scattered all over the world that tout a variety of renewable energy sources, the majority of EV charging is done at home by the vehicle owner. A single overnight charge for the car can equate to running a large appliance for over a month, depending on the size of the vehicle and the intended battery range. While renewable energy sources have increased in recent years, solar power still accounts for less than 2% of the total U.S. energy production. Wind and hydropower account for about 14% of total energy output and nuclear power represents just under 20%. But it is fossil fuels like coal and natural gas that power the majority of American homes and businesses with nearly 63% of all energy generation in the United States. This means that the overnight charge for your environmentally friendly car is actually very likely dependent on fossil fuels, increasing emissions as the battery "fills up," even though no fuel is going into a gas tank.

Producing and disposing of large, powerful batteries for EVs has a huge environmental impact

While the tail pipe emissions from EVs is non-existent, the effort to achieve the green friendly ride requires a much heftier CO2 output than traditional cars. In fact, a battery-only (non hybrid) vehicle uses 8.8 CO2e tons on average to produce which is over 2 tons greater that of a traditional fuel or diesel consuming vehicle. Forty-six percent of all emissions generated by a battery operated vehicle occur at the time of production, before the EV has even traveled to the dealership. According to a report by Ricardo, this emissions heavy production process poses a significant threat to the climate.

Batteries for EVs also have a limited life, which poses another set of problems for the future of the clean energy cars. For larger vehicles like vans and buses, batteries are estimated to need replacement every few years. Smaller cars may use their batteries for 7-10 years, depending on a variety of factors. But disposing old batteries is no simple task and is one that most countries are ill prepared to deal with. As they cannot be taken to landfills because of their toxic acid components, they must be recycled, which is an expensive, labor intensive process. Currently regulations are being considered by the United States and the European Union for battery disposal. China places the burden of disposal on the car manufacturers.

The future of energy in the United States

While Biden may get a round of applause when he suggests the end of fossil fuels, the reality of enacting such a plan is not only unrealistic, it implicates an elimination of millions of jobs and a near-halt to domestic energy production. Biden may not have been connecting the dots, but to run a battery powered, "clean energy" nation, you need power. The United States is already behind in production vs. consumption of energy and as more cities, like NYC, San Francisco, and Los Angeles vow to bring more electric vehicles into the fold and purge the gas-guzzling cars of old, power will need to increase quickly. The technology behind making renewable energy sources a reality for the power needs of the U.S. is woefully behind. It is currently estimated that, based on our current rate of increased energy need, America will be 79% reliant on fossil fuels by 2050. Apart from banning fracking and saying "no" to drilling, Biden failed to suggest an alternative to a desperately needed source of power.