Biden Events to be Held Virtually Amid Wuhan Virus Panic 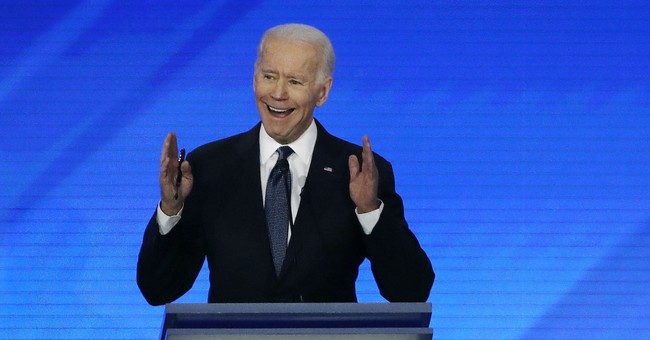 Democratic Presidential frontrunner Joe Biden will be holding his next two campaign events virtually amid public fear that large gatherings of people could become hotbeds for the spread of the Wuhan Virus.

Following an announcement on Wednesday by the World Health Organization that the virus was now a global pandemic, Biden sent word that his upcoming campaign visits in Florida and Illinois would no longer be large crowd events.

An official statement from the Biden campaign said that they had been in touch with "relevant officials," which included the recently formed Public Health Advisory Committee.

"As a result of those conversations and at the request of elected officials in Illinois and Florida, we will no longer hold large crowd events on Friday and Monday in those states," the statement read.

“As a result of those conversations and at the request of elected officials in Illinois and Florida, we will no longer hold large crowd events on Friday and Monday in those states.” pic.twitter.com/MOvmMJOrCB

The announcement from the Biden campaign did not immediately specify what the virtual gatherings would entail or how to access them but promised details would soon be available. The status of events scheduled after the now virtual campaign stops was left open for later detail.

The decision to hold virtual campaigns came along with another announcement from the Biden team regarding the formation of the Public Health Advisory Committee, an initiative led by Biden to protect supporters and staff. The committee was described as "science-based, expert advice regarding steps the campaign should take to minimize health risks for the candidate, staff, and supporters." Both Biden and his fellow Democratic candidate Bernie Sanders, 77 and 78, respectively, are at an advanced age considered to be most vulnerable to the Wuhan virus.

Biden will also be making remarks on Thursday regarding the pandemic from his home state of Delaware. Biden has been consistently critical of President Trump's handling of the Wuhan virus, saying that he should let the Center for Disease Control take charge of the decision making.

"I think there’s a reason why you see the markets falling and you see the reason, the reason why people are very upset,” he said during a Monday appearance on MSNBC. “But I think if the president were to just get out of the way, let the experts at CDC and others handle this, speak to it, talk about what needs to be done, we’d all be better off."

The now heavily modified events in Illinois and Florida would generally be considered vital as both states carry a hefty number of delegates. However, after the last two rounds of primaries, Biden leads Sanders by a considerable amount and is not expected to lose either state's contest. Sanders and Biden are scheduled to debate this upcoming Sunday in Arizona, but both candidates called for an audience-free event in an abundance of caution. Some thought after Biden's decisive victories that the debate would be canceled, but Sanders has said he wants to go forward.