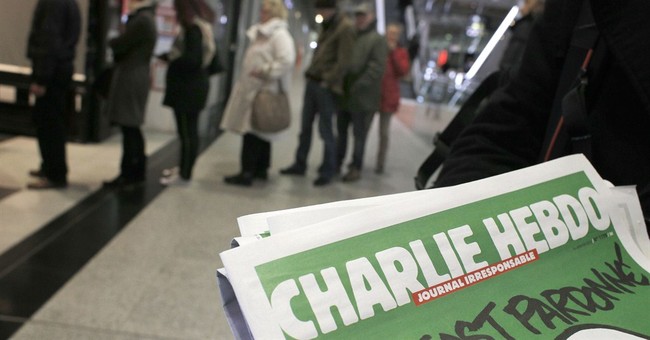 The latest issue of the satirical magazine Charlie Hebdo reportedly "sold out within minutes.” But despite the publicity it’s garnered worldwide after several members of its staff were coldly executed by Islamic extremists, some countries are taking illiberal and precautionary steps to prevent the new cover’s dissemination.

A Turkish court on Wednesday ordered the telecommunications authority to ban access to websites showing Charlie Hebdo's front cover with the image of the Prophet Muhammad, a state-run news agency said.

The Anadolu Agency said the ban, which would block access to the websites in Turkey, was ordered by a court in the southeastern city of Diyarbakir, according to the Dogan news agency. The decision came from the court, because a lawyer in Diyarbakir filed a petition saying the websites were a danger to "public order."

CNN reports that the Turkish government is so concerned about the content of the image that it’s sending in armed personnel to shut down free expression:

Earlier, police went to the offices of an Istanbul paper and blocked off traffic around it after two columnists included small images of the cover with their columns, the paper reported.

Armored police blocked the entrance and stopped distribution trucks at the printing press in Istanbul, the secular daily Cumhuriyet reported.

See the cover below:

BREAKING: The brilliant new cover of Charlie Hebdo. I suggest the entire world retweets this. pic.twitter.com/yjlQjTluKE

The captions read “All is Forgiven.” Yet despite this seemingly innocuous message, the cartoon has been panned in other Muslim-dominated countries as well:

Al-Azhar, Sunni Islam's most prestigious centre of learning, warned that new cartoons would only serve to "stir up hatred".

The drawings "do not serve the peaceful coexistence between peoples and hinders the integration of Muslims into European and Western societies," the Cairo-based body's Islamic research centre said in a statement.

Earlier on Tuesday, Egypt's state-sponsored Islamic authority, Dar al-Ifta, said the latest cover of Charlie Hebdo was "an unjustified provocation against the feelings of 1.5 billion Muslims".

"This edition will result in a new wave of hatred in French and Western society. What the magazine is doing does not serve coexistence and the cultural dialogue Muslims aspire to," it said.