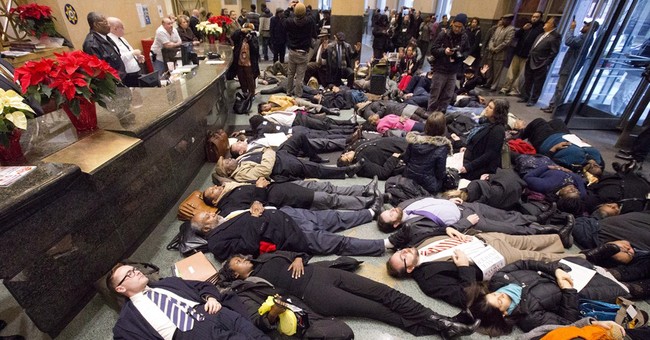 The Oregonian has the scoop:

U.S. Navy veteran Dario Raschio was all smiles Saturday as he awaited a special honor from U.S. Sen. Ron Wyden, who joined him at Portland Community College's Southeast Campus to present the 100-year-old with a handful of medals. "I feel I'm no hero," said Raschio, dynamic and spry, before the event. "I don't accept it as being a hero. I accept it as being a part of my job."

Shortly after Wyden began speaking, though, protesters erupted in the back of the room, shouting "hands-up, don't shoot!"

But the medal ceremony wasn’t entirely ruined. After a brief postponement, the service continued as planned:

On Saturday, Raschio glossed over the incident. He seemed more concerned by the immediate action he was witnessing. As he grabbed the mic to speak, more shouts came from the back of the room, demanding the military exit from Iraq. The feisty centenarian quickly responded, "Give me a chance" which brought chuckles from the audience. He further chastised the shouters, saying "Let's show a little respect for this occasion," to which the crowd applauded.

He accepted the medals on behalf of those who died in WWII and ended his short speech by saying, "God bless America. And you people that are here for a cause, whatever it might be—show respect to Sen. Wyden." Wyden took back the mic, and followed up, "One of the reasons that we can come here today and be heard and express our views is because of veterans like Dario."

No one doubts that these protestors had a legal right to show up and voice their concerns. But isn’t there a time and place for such outspoken activism? It seems self-evidently classless and disrespectful to (almost) derail this kind of a ceremony. Raschio deserved to be honored without interruption.

Let’s also not forget that Sen. Wyden and those present were honoring more than just one man; they were honoring all combat veterans who perished during the war. So while Raschio handled the situation with grace and humility -- which, of course, will surprise no one -- these protesters should be utterly ashamed of themselves.

I hope Americans read these kinds of stories with contempt. Common decency, gratitude, and a sense of respect for veterans and their families should have stopped this coordinated demonstration in its tracks. Instead, the protesters' complete lack of propriety, in the long run, will almost certainly do more harm than good.