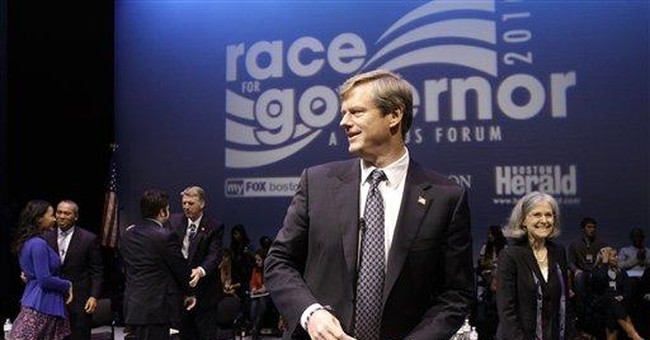 Messaging, outreach, and advertising -- these things are important. But oftentimes a political campaign cannot be successful without one more little thing: money.

And surprisingly enough, Democratic gubernatorial candidate Martha Coakley doesn't seem to have a whole lot at the moment ... while her opponent, um, does:

Republican Charlie Baker maintains a hefty fundraising lead over Democrat Martha Coakley as the governor's race heads into its final full month of campaigning. By the end of September, Baker and running mate Karyn Polito had more than $1.5 million combined left in their campaign accounts, aides said. That's almost six times the combined $266,000 cash left in the campaign accounts of Coakley and her running mate, Steve Kerrigan, according to Coakley aides.

In the general election, governor and lieutenant governor candidates for each party run as a ticket. Baker and Polito also reported raising more than $1 million in September, three times the $334,000 raised by Coakley and Kerrigan.

The Boston Globe has a handy graph putting those figures into perspective: Primary campaigns, as Coakley now knows, can be expensive enterprises. Still, money isn’t everything. More than half of the state’s voters are Independents while at the same time about a third are registered Democrats. To win, therefore, Baker must cross party lines to form a winning coalition -- which, by the way, he sought to do in a campaign spot released last week:

Baker is running on a pro-jobs, pro-choice, and pro-reform platform. He’s the quintessential moderate. And for now, at least, he seems to be in pretty good shape.