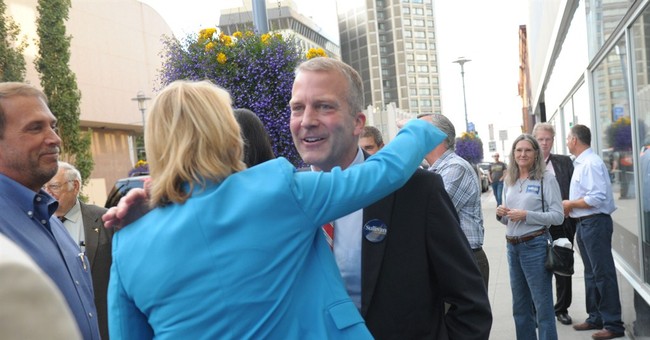 He also won, in part, because he crushed his two GOP rivals in the fundraising game:

A tea party attempt to overcome a mainstream Republican came up short in Alaska as former state Attorney General Dan Sullivan won the GOP primary to become his party’s candidate to take on U.S. Sen. Mark Begich in the fall.

Sullivan entered the primary the presumed front-runner, with the backing of national GOP powerbrokers and a huge cash advantage over his rivals.

Sullivan won by a rather comfortable margin:

With 80% of precincts reporting, the Associated Press projected that Mr. Sullivan would top the Republican primary field. He had 40.2% of the vote, compared with 31.8% for tea party candidate Joe Miller and 25.1% for Lt. Gov. Mead Treadwell.

Mr. Sullivan said in a statement that he looks "forward to painting a clear contrast between Mark Begich's inability to move our state forward and my vision for a brighter and better Alaska."

Speaking of Begich, a SuperPAC supporting him spent roughly $4 million during the late primary campaign attacking Dan Sullivan. At the same time, some of the attack lines used against him sound eerily familiar:

“Alaska’s bitter and divisive Republican primary exposed that Dan Sullivan does not look out for what’s in the best interests of Alaskans,” said Democratic Senatorial Campaign Committee deputy executive director Matt Canter in a statement from Washington early Wednesday. “After carrying water for Sarah Palin and trying to restrict access to public lands for hunters and fishers, Sullivan is now hoping to do the Koch brothers’ bidding in the U.S. Senate.”

Begich attacked Sullivan and Treadwell over women’s health issues — a recurring theme in races across the country this year, driven in part by the ongoing Obamacare debate — and joined the other Republicans in attacking Sullivan over his Alaska roots. (Sullivan is originally from Ohio and worked for the George W. Bush administration.)

Par for the course for Democrats these days, I suppose. But the goods news is -- and unlike, say, in Missouri -- there doesn’t seem to be any lasting ill-will between the Republican candidates. Both of Sullivan’s rivals called to congratulate him after he was declared the winner.

Hopefully now Republicans can unite in preparation for the general election campaign, and therefore pick up a seat they are more than capable of winning:

Alaska is a red-leaning state that could become one of the six Republicans need to net in order to win control of the Senate. John McCain defeated Barack Obama there by almost 22 percentage points in 2008. Begich, a former mayor of Anchorage, that year unseated GOP Sen. Ted Stevens, who had just been convicted in an ethics case that was later thrown out. Obama lost by a narrower but still large margin, 14 points, to Mitt Romney in 2012.

That's to say, it would be a painful loss to swallow if Republicans don't unseat Begich; after all, their chances of recapturing the upper chamber would be seriously diminished.

Hence why party elders (and grassroots activists alike) will be monitoring this race very closely through Election Day.