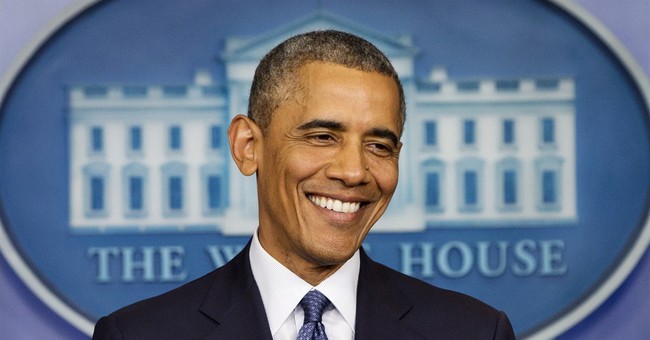 Briefly interrupting his annual vacation on Martha’s Vineyard on Thursday, President Obama addressed two looming crises facing the nation: the situation in Iraq and the ongoing rioting in Ferguson, Missouri.

He began with Iraq.

“First of all, we continue to make progress carrying out our targeted military operations," he argued.

These operations were absolutely essential to repelling ISIS forces and protecting Iraqi Christians, Yazidis, and other religious minorities trapped on Mount Sinjar, he continued.

“Without food or water, they had a terrible choice: starve on the mountain or be slaughtered on the ground,” he said. “That’s when America came to help.”

He also announced that a “small team” of American military and civilian personnel had conducted a comprehensive assessment of the humanitarian situation on the ground yesterday. They concluded that food and water had been reaching thousands of civilians, and thousands more were being evacuated every night.

"The situation on the mountain has greatly improved," he declared. “We broke the siege of Mount Sinjar."

In the meantime, he said, the U.S. will continue to launch airstrikes against ISIS military targets, provide arms and weaponry to the Kurds, and urge support for Iraq’s “new, inclusive” government.

He then turned to the situation in Ferguson, Missouri -- vowing to get to the bottom of what happened.

“I’ve already asked the DOJ and FBI to independently investigate the death of Michael Brown,” he said. “I made clear to the attorney general to determine exactly happened and to make sure justice is done.”

“We lost a young man, Michael Brown, in heartbreaking and tragic circumstances,” he continued. “He was 18-years-old. His family will never hold Michael in their arms again. And when something like this happens, the local authorities need to be open and transparent about how they're investigating this kind of a situation.”

At the same time, he said, both peaceful protestors and police alike need to begin respecting one another and the rule of law.

“I know that emotions are raw in Ferguson and there are certainly passionate differences about what happened,” he continued. “But let’s remember that we’re all part of one American family.”

After concluding his remarks, the president left without taking questions, and went directly to the golf course.