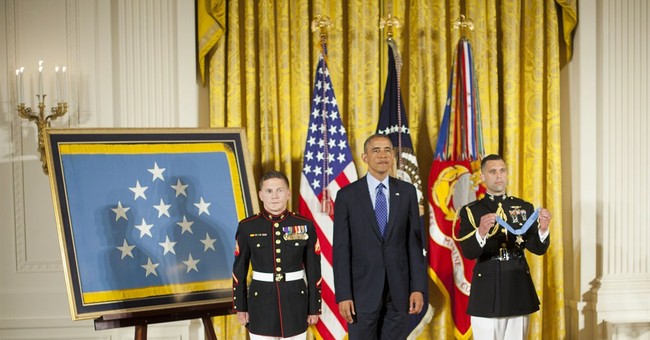 Alas, we missed this when it first happened. But we’ll cover it now. After all, it's a truly incredible story of bravery, sacrifice and selflessness:

William "Kyle" Carpenter lost most of his jaw and an eye when he fell on a grenade to shield a fellow Marine from the blast. His body shattered, one lung collapsed, Carpenter was nearly given up for dead after that 2010 Afghanistan firefight.

Then he spent 2½ years in a hospital as doctors worked to rebuild his body. But if you think he's bitter, think again.

"I look back, and I'm actually very appreciative I had those two and a half years, because those years put things in perspective more than a whole lifetime of things could if I wasn't there," Carpenter said.

On Thursday, he [became] the eighth living veteran of U.S. combat in Iraq and Afghanistan to receive the Medal of Honor, the nation's highest military award.

Carpenter was wounded in Helmand province, Afghanistan, on November 21, 2010, while serving as a machine gunner, according to the White House.

Carpenter and another Marine were manning a rooftop position during a firefight with Taliban insurgents when a hand grenade landed nearby, the Marine Corps said.

Carpenter rushed toward the grenade and his body took most of the blast, according to the Marine Corps. The other Marine, Lance Cpl. Nicholas Eufrazio, was also injured.

What’s more, after he was wounded, he nearly died…twice -- once shortly after the blast, and later at Walter Reed Hospital -- only to defy the odds and accomplish some amazing things. As he recently put it: “The enemy killed me. I came back, ran a marathon, completed a mud run and jumped from a plane. I won't ever quit. I am just getting started.”

Wow. What else could I possibly say? His actions -- and positive outlook on life -- speak for themselves.