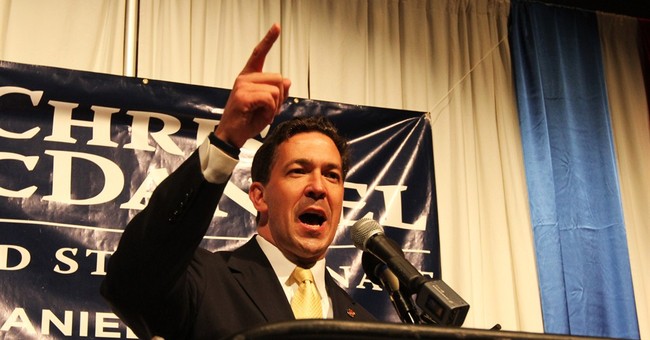 That is to say, a primary run-off.

As late as Wednesday morning, neither Sen. Thad Cochran (R-Miss.) nor Tea Party challenger Chris McDaniel had garnered a majority of the vote (although it was exceedingly close) and therefore the race is expected to be extended by another three weeks. As we noted yesterday, the campaign has been marred by mudslinging, scandal, illegal activities, and vicious attack ads. So if the primary run-off does happen, expect more of the same:

A career-long politician is fighting for his political life, trying to retain his coveted Senate seat against an insurgent candidate who is oh so close to victory.

The race between longtime U.S. Sen. Thad Cochran and conservative challenger Chris McDaniel was too close to call early Wednesday. Both candidates appeared to be just short of the 50% threshold needed to avoid a runoff, making it hard to project a clear winner.

If the numbers hold up and neither candidate gets more than half of the vote, Cochran and McDaniel will face off for a second time in a primary runoff on June 24.

There are growing concerns among Republicans that a primary run-off would badly damage the GOP brand, and thus, give Democrats a fighting chance to recapture the seat. But those fears are in some ways misplaced. Mississippi is by all accounts a crimson state; indeed, the University of Virginia’s Center for Politics predicts that the seat is relatively “Safe” for Republicans -- that is, if Cochran himself is the nominee.

But will he be? For what it’s worth, it’s no secret who Democrats want to win:

Democrats have watched the race as intently as Republicans: Despite Mississippi’s strongly conservative tilt, Democrats hope to mount a competitive general-election campaign against McDaniel, a slash-and-burn ideological activist who fashions himself after Texas Sen. Ted Cruz and has a hefty record of incendiary statements and personal associations.

Within the past two weeks, private Democratic polling has shown that the party’s nominee, former Rep. Travis Childers, would start a general election statistically tied with McDaniel. A race against Cochran, who is well-liked by independents and many Democrats, would be difficult to the point of futility.

Were he to win the primary, Sen. Cochran would have many advantages heading into the general election. For starters, he’s liked across party lines and has the added bonus of being an incumbent. His opponent has none of these things, of course. So if Cochran’s defeated in the primary, the race will effectively become an open-seat contest.

Again, Democrats don’t have much of a shot against Cochran. But if McDaniel wins that could dramatically shift the contours of the race. It would also give the Tea Party a major victory -- and that matters because primary upsets have been few and far between this election cycle.

UPDATE: This primary run-off is happening.