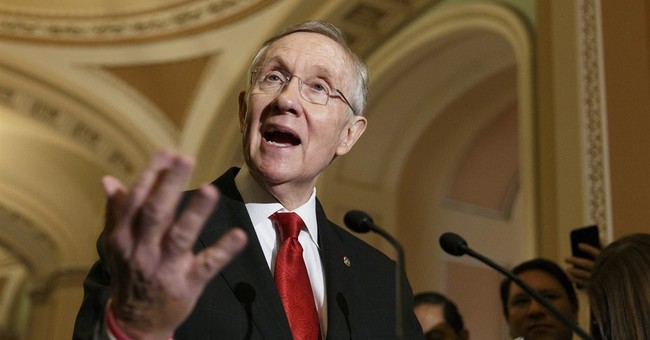 The Senate Majority Leader has a penchant for bashing the Koch Brothers for all sorts of things. But this might take the cake. Sen. Reid openly declared today on the Senate floor that two “multizillionaires” named David and Charles Koch are not a cause of climate change, mind you, but rather "one of the main causes." Let that sink in.

This is a point he made explicitly, delivering it with both conviction and certainty. But while trolling the Koch brothers (who most Americans have never heard of, by the way) might be his latest obsession, at what point do his crazy rants reach the point of diminishing returns?

For example, Forbes contributor and Townhall columnist Ralph Benko is already calling on Republicans to censure him. That is, if and when they wield enough political power to bring that tantalizing idea to fruition:

Sen. Joseph McCarthy (R-WI) trafficked in the culture of allegations of the “un-American.” He was censured by the United Senate and died disgraced.

Now Senate Majority Leader Harry Reid (D-NV) is engaging in misconduct comparably shameful: “redbaiting” those with red state values. He deserves censure for such misconduct. If the Democrats will not provide it, if the Republicans regain the majority in the U.S. Senate the censuring of Harry Reid deserves to be the first order of business next year.

This is not a random act by Reid.

Of course it isn’t. The politics of destruction and vilification are very much in play here -- and will continue to be for some time. Reid, too, more than anyone else in his caucus, is promoting Kochsteria like it’s his job. But again, when does a “campaign strategy” become so farcical and so ridiculous that its chief spokesman loses all credibility? Apparently we haven’t reached that point…yet. But how far off can we really be?