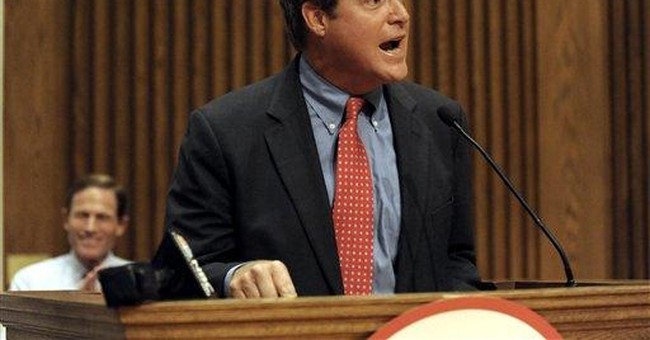 Edward Kennedy Jr. will reportedly run for an open state Senate seat in Connecticut’s 12th District, the Associated Press reports. He is expected to make the official announcement later this week:

Ted Kennedy Jr. is planning to run for the state Senate in Connecticut in his first bid for public office, two people briefed on the decision told The Associated Press on Monday.

The son of the late U.S. Sen. Ted Kennedy of Massachusetts will announce Tuesday he intends to seek the Democratic nomination for the 12th Senatorial District, two people said on condition of anonymity because Kennedy wants to make the announcement. Kennedy said he would announce his decision that evening at a library in Branford.

Kennedy is 52-year-old health care lawyer who lives in Branford, a coastal town near New Haven, and has been mentioned as a possible political candidate for some time. He said last month he was considering running for the seat.

Kennedy Jr. has never sought political office before, even though he’s been urged to in years past by members of his family and others. But now his children are somewhat older, it seems, so he’s finally ready to test Connecticut’s political waters. Meanwhile, his brother Patrick -- who represented residents of Rhode Island in the House of Representatives for 16 years -- is convinced he’d be a compelling candidate if he chooses to run. And as a consequence, is rather enthusiastic about his candidacy:

Patrick Kennedy said his brother's life was transformed when as a boy he lost his leg to cancer. Describing him with the phrase that was the title of a book by their uncle and former President John F. Kennedy, Patrick Kennedy said his brother became a "profile in courage": surviving a deadly cancer, having his leg amputated and later becoming a champion for people with disabilities.

"I've always thought my brother could be a really powerful leader, I'm not just talking elected-office sense, but leadership sense," he said. "He's just got such a tremendous personal story. I've always thought he'd be a very compelling political figure because he's integrated work with public policy with his own personal experience."

He added that if Kennedy Jr. does decide to run, he'll get plenty of support from the Kennedy clan.

"I haven't succeeded in getting him to take that plunge, but if he does, like everyone who knows him well, we're going to be very enthusiastic in our efforts on his behalf," he said.

One wonders why with such a famous surname the younger Kennedy doesn’t run for a more prominent political office. He certainly could. But I suppose every politician must start somewhere. Plus, if his goal in public service is to champion the causes of his progressive father, perhaps winning a state Senate seat in Connecticut isn’t the worst place to start.