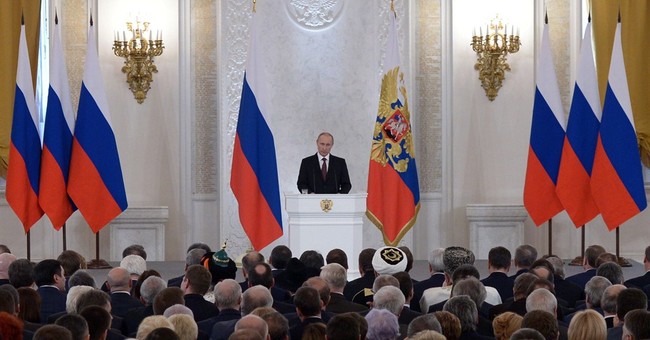 The Washington Post explains who, specifically, was reportedly targeted:

Some of the lawmakers sanctioned by Russia are wearing their travel bans as badges of honor. (Much like the Russians did). But a “sanctions war” with Russia is no laughing matter for obvious reasons. Russia, meanwhile, shows no sign of backing down or removing their troops from Crimea. In fact, the opposite is true: the Kremlin is moving quickly to make its annexation of Crimea complete:

The vote in the lower house, the State Duma, to annex Crimea was 443 to 1. The measure needed 300 votes to pass.

The bill is scheduled to be taken up Friday by the upper house, the Federation Council, where expected approval will make Crimea officially part of the country under Russian law -- despite the insistence of the United States, Europe and others that it remain part of Ukraine.

For her part, Sen. Kelly Ayotte (R-NH) announced she will lead a congressional delegation of Washington lawmakers to the Ukraine this week, in part to reestablish ties with our allies in the region:

U.S. Senator Kelly Ayotte (R-NH), a member of the Senate Armed Services Committee, is leading a bipartisan congressional delegation mission this week that includes stops in Ukraine and Israel. Senator Ayotte, along with Senator Joe Donnelly (D-IN) and Congressman Stephen Lynch (D-MA), will meet with government officials, military personnel, and civil society members in both countries.

"In these dangerous times, it's more important than ever that the U.S. reinforce relationships with our allies and key partners," said Ayotte, who serves as Ranking Member of the Senate Armed Services Subcommittee on Readiness and Management Support. "The challenges facing Ukraine and Israel have far-reaching consequences for our national security and peace in the world, and hearing directly from leaders there will inform my work in the Senate?."

Yes, they do. But I’m not sure how another “delegation” or “foreign visit” will resolve the situation. After all, they have not been very effective thus far.

I’ll leave you with Slate’s Fred Kaplan’s op-ed about what, exactly, U.S. leaders can do to put an end to Putin’s quest for more territory. Hint: project real strength, not weakness.