CNN Journalist: I Was Held Up at Gun Point and Robbed For Covering the Venezuelan Protests 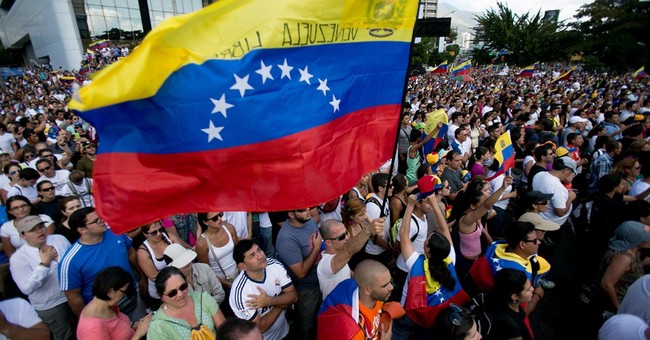 Protests and demonstrations are not only engendering social unrest in the Ukraine. On the other side of the planet, students have taken to the streets of all major Venezuelan cities to protest growing inequality, unspeakable violence, and government censorship and corruption. Legal Insurrection posted this informative and must-see video last weekend:

The violence continues; and if anything, is only getting worse. For example, a CNN journalist explained on air today that last night he was covering the protests -- i.e., watching national guard security forces attempt to keep the peace between pro-government and anti-government protestors -- when “armed thugs on motorcycles” appeared out of nowhere, and tried to disperse the anti-government crowd before turning on the journalists themselves. “The next thing I know, I was staring down the barrel of a chrome-plated 9 mm pistol, and then three armed men proceeded to rob our crew,” he said. Terrifying (via Hot Air):

Reuters reports five people have already been killed since the protests began, and the opposition’s de facto leader, Leopoldo Lopez, is in prison scheduled to appear in court today. Meanwhile, Venezuelan President Nicolas Maduro shows no sign of surrendering, or meeting the demands of the opposition.