Washington State Governor: I am Suspending the Death Penalty 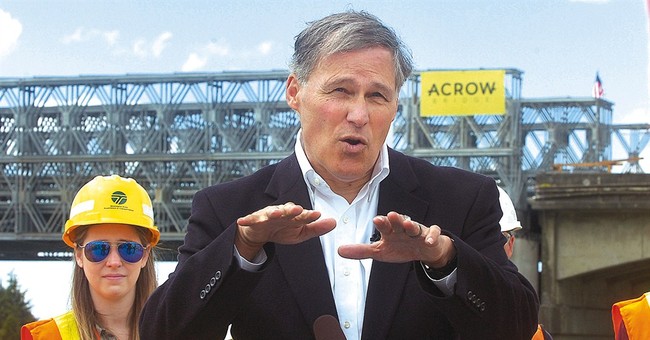 Perhaps taking a page out of the president’s political handbook, Washington state’s Democratic governor has announced he is placing a moratorium on state executions. No one on death row will be executed during his tenure, he said today at a press conference; but no one convicted of murder will be released or have their sentences commuted, either. The AP reports:

Gov. Jay Inslee said Tuesday he was suspending the use of the death penalty in Washington state, announcing a move that he hopes will enable officials to "join a growing national conversation about capital punishment."

The Democrat said he came to the decision after months of review, meetings with family members of victims, prosecutors and law enforcement.

"There have been too many doubts raised about capital punishment, there are too many flaws in this system today," Inslee said at a news conference. "There is too much at stake to accept an imperfect system."

Inslee said that the use of the death penalty is inconsistent and unequal. The governor's staff briefed lawmakers about the move on Monday night and Tuesday morning.

Inslee's moratorium, which will be in place for as long as he is governor, means that if a death penalty case comes to his desk, he will issue a reprieve, which isn't a pardon and doesn't commute the sentences of those condemned to death.

"During my term, we will not be executing people," said Inslee, who was elected in 2012. "Nobody is getting out of prison, period."

Opposing capital punishment on principle is a perfectly legitimate position to take. But does the governor have the legal or judicial authority to unilaterally postpone a state execution? It seems he does. In fact, one sweeping power vested in the state's chief executive (besides, of course, the ability to pardon an offender if he so chooses) is issuing a “reprieve,” which would temporarily save a death row inmate from being executed, according to the Seattle Times:

According to the state Attorney General’s website, “Under RCW 10.01.120, the Governor has the authority to commute a death sentence to life in prison at hard labor and, upon a petition from the offender, to pardon the offender. A commutation is generally defined as a lessening of the criminal penalty, whereas a pardon is often defined as the termination of the criminal penalty.”

The Attorney General’s Office also said that the governor “has the power to issue a reprieve (also called a stay of execution or a “respite”) to temporarily delay the imposition of a death sentence. A reprieve is to be issued “for good cause shown, and as the Governor thinks proper.”

“Washington’s Constitution and state statutes grant the governor significant powers over the fate of individuals sentenced to death,” Attorney General Bob Ferguson said in a statement Tuesday morning. “Consequently, the governor has the authority to hit the ’pause’ button for executions in Washington.”